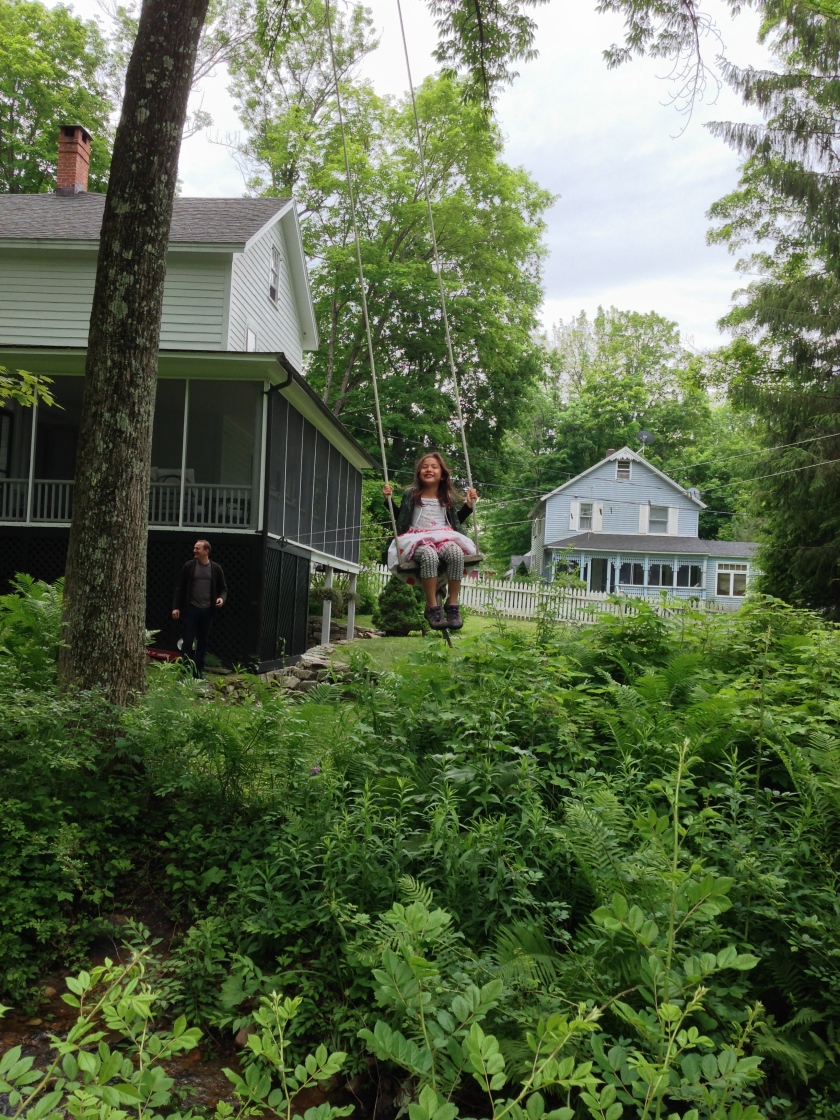 I never understood brunch. Its popularity hit new heights when I was in my twenties, when the notion of gussying up for a meal the morning after a late night was incredibly unappealing. My Sunday morning routine involved sleeping in, then eventually trudging down to the corner deli for a toasted bagel with bacon and a pint of pulp-free Tropicana, then spending the next few hours reading the Sunday Times on my bed.

The whole concept of brunch seems like a marketing ploy to get people to drink champagne during the day, but, even more importantly, a tidy dispensary of a restaurant’s Saturday night’s leftovers. Anthony Bourdain’s book “Kitchen Confidential” basically confirmed my suspicions. Case in point: Seafood frittata, two words that should never go together.

And yet, here we were, googling frittata recipes on a recent Saturday morning. Friends of ours with little children were up for a quick visit, so Sunday brunch was easier for them than Saturday dinner. But what else to make?

The great thing about brunch is that anything goes. What bylaws constitute what’s appropriate for brunch? You show me a meal that isn’t brunch-worthy, and I’ll show you an alcoholic who says it’s fine to drink on a Sunday afternoon. And yet…there was the frittata, but mostly because our guests were vegetarians.

Ours was also a dry brunch. Our libations, besides coffee, consisted of  hot cider (out of season. So, sue us) and fresh-squeezed orange juice. Bertrand made his arugula salad and we grilled some chicken sausage (I said most of us were vegetarians…) For the frittata, we broke in Luke’s cast iron pan (read: seasoned it. First time. So easy) since it was the only thing big enough to house the huge 24-egg recipe-doubled monstrosity (http://www.bonappetit.com/recipe/mushroom-leek-and-fontina-frittata). I swear, no leftovers were tossed in with those fresh, beaten eggs.

The frittata did contain, as our youngest guest put it, “too much green stuff.” I could chalk it up to his forming palate, but he correct he was. We added more greens than the recipe called for, but tasty ones. Aka, herbs. Along with flat leaf parsley, we threw chopped cilantro and mint into the mix. It also needed a bit of extra salt. Otherwise, it was a good match for the salad and chicken sausage, which our youngest guest did approve of. 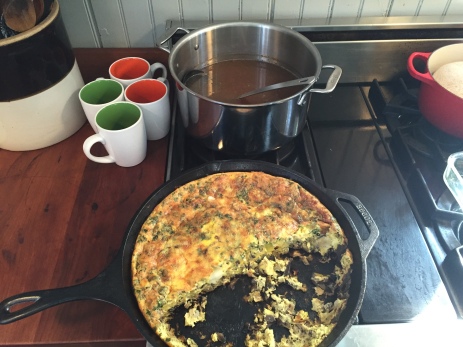 The best frittata we’ve ever had was the one our friends Rob and Brett made when they visited a few years ago. We’d made pasta with homemade tomato sauce (recipe below) for dinner the night before, so they woke early and poured the leftover sauce into the egg mixture bubbling in the oven (a good example of leftovers put to good use). I’ll never forget how the sweetness of the sauce turned the fluffy frittata into a magical treat. Maybe this recent one did have too many green things. And not enough red ones. Live and learn.

Preheat oven to 400 degrees. In cast iron pan, Pyrex dish or Dutch oven (anything oven-friendly, really) place tomatoes, garlic, olive oil and sea salt and stir well to ensure tomatoes are coated. Place in oven for 25 minutes, stirring occasionally. Sauce is ready when tomatoes have burst or are soft enough to squish. Remove from oven and place on stove, low heat. Stir in red wine, then sugar. Keep on low heat, stirring frequently, for ten minutes. Pour over pasta of choice, then sprinkle basil as garnish.

Note about this recipe: I stole this from Martina Arfwidson, who founded the beauty brand Face Stockholm with her mother Gun Nowak. Martina had a bunch of us up to her magically gorgeous house in Germantown, NY, for the weekend many years ago, when we were all single. She made this sauce for dinner, and the entire experience opened my eyes to how easy cooking could be. At this point in my life, I owned neither a cast iron pan, nor good olive oil, much less any kind of sea salt. I quietly sat with my glass of red wine, observing from a distance, marveling at the notion that tomato sauce could come from somewhere other than a jar and this sauce was being roasted, slowly and with care, in an oven. Its been a staple in our kitchen ever since. And yet, I’ve never thanked Martina for this. Better late than never.