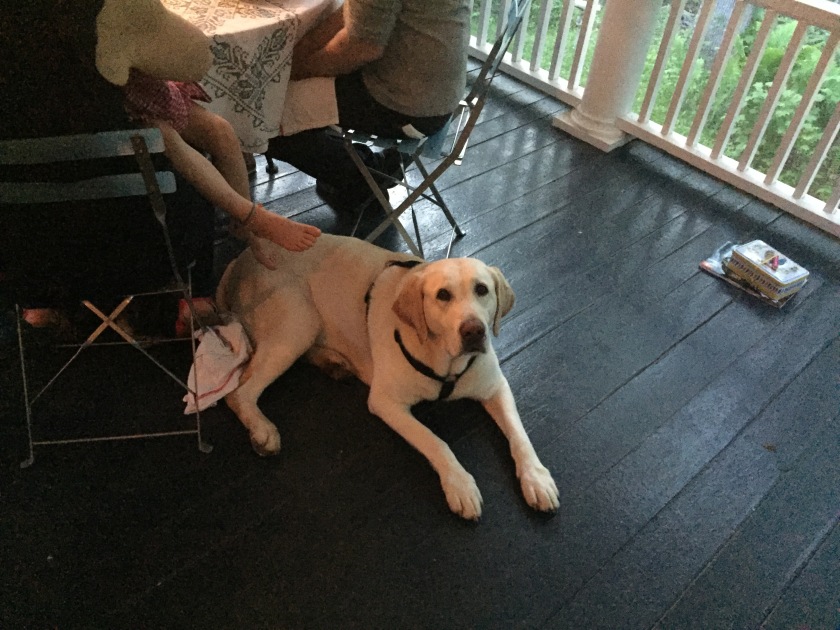 Nothing makes me happier than a weekend with lots of plans. Actually, happy is the wrong adjective. Nothing makes me feel more in control than a planned weekend. But you don’t want a weekend that’s too packed, so when the two barbecue invites arrived early last week, we decided to hold off hosting one of our own until a later date. Still, when Friday morning arrived, so did the hosting bug. “Let’s invite Amy and Emily to dinner,” I suggested on the drive to Guido’s. “Something small.” 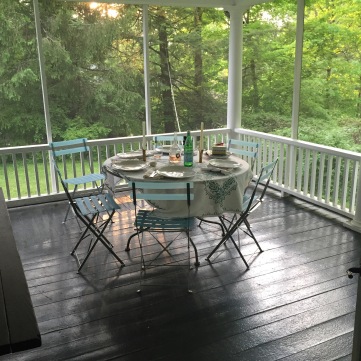 Bertrand nodded. “And it’s finally warm enough to eat on the porch.”

It seems like forever since we’ve hosted a big group for dinner, but after a long winter, you get, well, pretty out of shape. Having neighbors over was a good way to dip our toes back in. They’re your good friends, they only want to help, and when you get right down to it, food is secondary; they just want to hang. We could have done take out, or simply said, “We’ve got bread, cheese and tomatoes. You figure it out” and they would’ve been cool with that. But we wanted to cook, so we chose a menu we’ve made so often, we could have done it with our eyes closed: Chicken paillard, broiled cipollini onions and Bertrand’s salad. Now, if I could only locate the meat pounder… 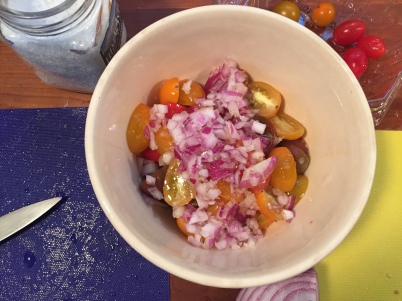 I searched through both utensil drawers, emptied out the junk drawer, and spilled the contents of the spatula jug in search of a meat pounder. How could we not have one?? I pictured the one we have in New York City, abandoned and pristine, gathering dust in the same dark drawer that holds every other fancy kitchen tool we purchased years ago, back when we entertained in our apartment. It was time for a big kitchen move. But what to do now?

I sent my stepson Luke down to the basement to retrieve the next best thing: a hammer. “I couldn’t find one, but I found this,” he said, walking into the kitchen, holding a hand hoe. Despite appearing gleamingly unused, I scrubbed it twice before using. It got the job done. Clever Luke. 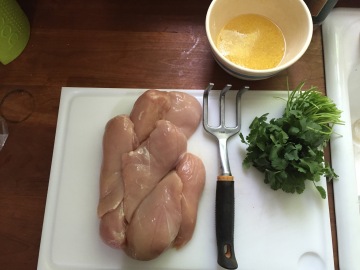 The breasts, the “pounder” and cilantro for the marinade

Three hours later, I stared at the nine chicken breasts soaking in their marinade on the top shelf of the refrigerator. I looked down at the two bags of arugula patiently waiting in the vegetable bin. The two wrapped baguettes sitting on the counter glared at me. I could almost hear their judgmental “tsk tsk.” We’d done it again. We’d overbought.  I picked up my phone. “Hey! Can you come for dinner tonite?” I texted our friend Tim. “Chicken paillard!”

Tim runs Berkshire Property Agents real estate (http://tinyurl.com/d2gds2v)  in Great Barrington. This being high season, we knew he’d be around. And, this being the beginning of a long holiday weekend, he just might still be at the office, too swamped to have even considered what he’d be having for dinner. I was right on all counts. “YES!” was the response I got five minutes later. 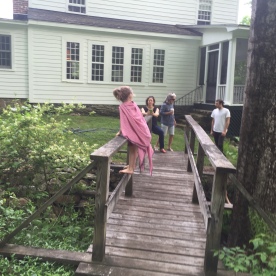 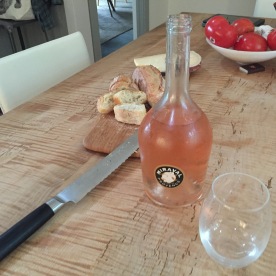 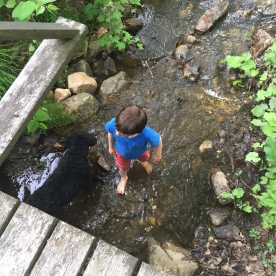 It ended up being kind of a perfect night. Tim brought delicious wine, Amy brought ice cream, Emily brought her six-year-old twins and everyone brought their dogs. Bertrand and I were so relaxed, it gave me pause to consider rethinking our usual dinner play: over-thinking, then over-cooking, thus stressing ourselves out over undertaking overly ambitious dishes. If you marinade your meat well, grill your favorite vegetables and let your husband make one of his killer salads, that’s all you really need. 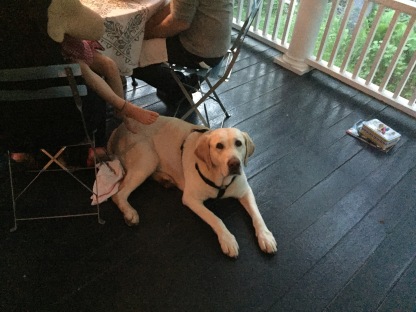 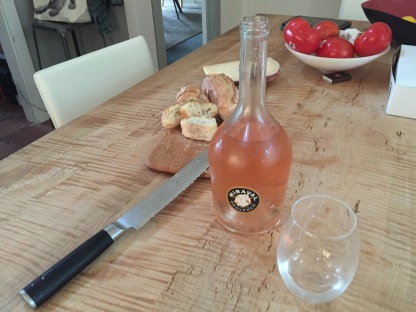 But it goes back to the guest list, honestly. When we first moved in, we felt the need to impress. We didn’t know these people who would become our friends, so it was like the beginning of a courtship,when you’re all on your best behavior and trying too hard. As they say, you know you’re in love when you can be yourself. So what if being yourself means occasionally overdoing it?

It was a good thing we decided to do this dinner–it turned out to be our only social meal all weekend, as those two barbecues ended up being cancelled. Sure, the lazy side of us does relish the occasional cancelled plan, but these three days would have been a bust had we not thrown out the impromptu, unplanned invite. Being a control freak is over-rated. 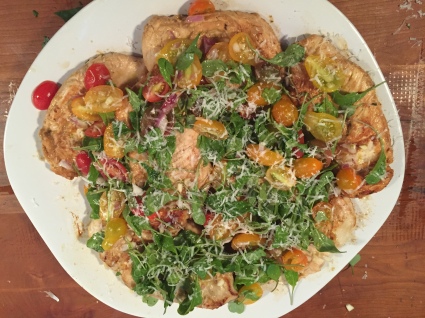 Combine tomatoes, onion, garlic, 3 T of oil and salt. Set aside. Squeeze lemon juice from lemons and add to small bowl with wine. Sprinkle in cilantro, then pour mixture into sturdy, deep Tupperware-like container. With meat pounder (or hammer, or hand hoe), flatten chicken breasts to 1/4 inch thickness, then place in marinade container, making sure that each breast is thoroughly coated. Seal and store in refrigerator for at least four hours, ideally. When ready to cook, heat large cast iron skillet with medium flame and add 1 T oil (you always want a fine layer of oil in skillet, so add more when needed). Fry breasts, flipping frequently so each side is evenly browned. Add arugula to tomato mixture, stir well, then generously top each breast with the mixture. Finally, garnish with desired amount of Parmesan. 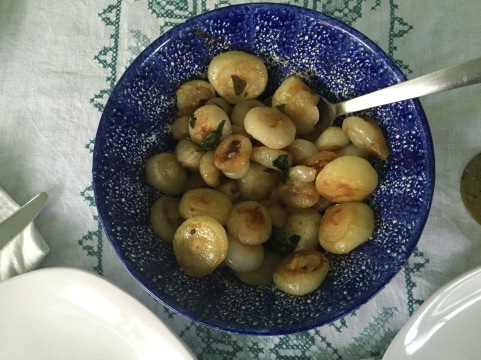 Preheat oven to 400. Place onions in large baking dish. Pour 2 T olive oil  and seal salt into dish and mix well, making sure all onions are coated with oil. Place in oven for 30 minutes, stirring occasionally. Take them out just as they start to brown and caramelize a bit. Meanwhile, in a small frying pan, heat the remaining 2 T olive oil, then add sage. Fry for a few minutes, stirring constantly, so they get crisp but not burned. Pour over onions and mix well.