The first and only time we visited Chez Panisse was when Bertrand and I took Luke to check out UC Berkeley. He was only a freshman in high school, so we were a bit early, but we he agreed to venture across the Bay Bridge and tour the campus. More likely, it was the lure of Chez Panisse. (Featured image courtesy of WineFashionista.com)

We were seated upstairs, in the more casual section. I must confess, I cant remember what we ate, but I remember the sunshine and the vibe that subtly implied that you were within greatness. Bucket list greatness. This was how the wise people dined.

A decade later, I find myself back in Berkeley, in close proximity to the restaurant—just over the backyard fence, to be exact, inside perfumer Mandy Aftel’s Archive of Curious Scent. 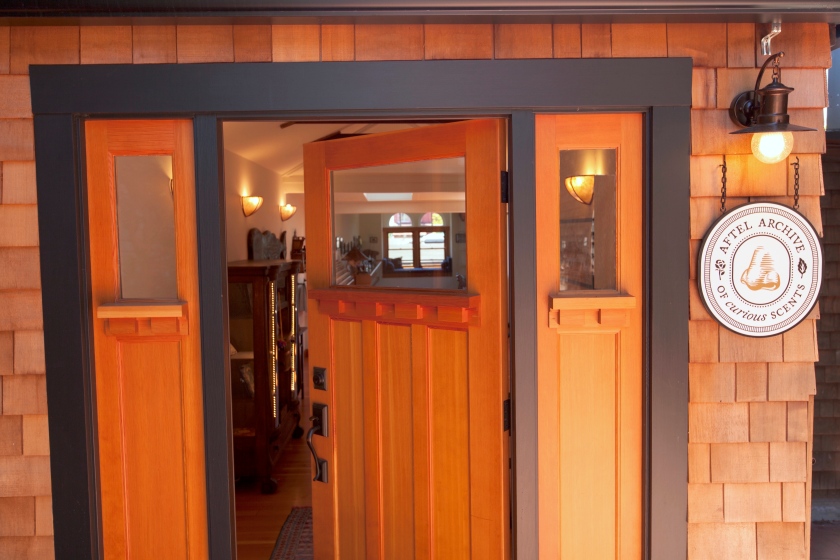 24 hours earlier, I had been sitting at Gate 24 inside Delta’s JFK terminal, growing ever more frustrated by my flight’s multiple delays. The Sonoma fires had caused these delays, so, well, cry me a fucking river. But, still. I wanted to get to San Francisco to join my friends in setting up their conference, the Cherry Bombe Jubilee, poor air quality (and, Oh yeah,  zero visibility) be damned. By the third delay announcement, though, I thought, Fuck this (I cursed twice in one paragraph. Oops), and, at Bertrand’s suggestion, booked myself on a flight to Oakland (no known delays there!) for the next morning. On the E Train home, a text informed me that the flight was, in fact, finally taking off at the third rescheduled time of 6:30. Hell hath no fury like a passenger duped, Delta.

I woke at 4:30, cabbed to Kennedy, touched down in Oakland (on time!) and walked into the vast Palace of Fine Arts before 2, where we were greeted by my old friend and former co-worker, Janet, now a Berkeley transplant.

We piled chairs, then lined them up row after row, covered ugly tables with pretty pink tablecloths, unloaded dozens of boxes of Cherry Bombe’s new eponymous cookbook and did our best to make the green room look like a green room. By the good graces of security rules, we had a hard stop at 6:15. Everyone was exhausted, but not Janet or me. We were off to see Mandy!

The first time I saw the name Mandy Aftel was back in the early Nineties. I was a beauty editor at Mademoiselle Magazine and she had sent me a few samples of her creations. Immediately, I was hooked. The purity of her blends was spectacular. In her note, she explained that she used no synthetic notes but only pure essential oils of the highest quality. With all due respect to Mr. Klein, Mandy’s scents were the antithesis of Eternity, a scent whose single whiff has always forced me to cross the street in order to avoid a headache.

It took a few more years before I finally met Mandy and she did not disappoint. With a mane of auburn-red hair and bangs brushing over her big green eyes, her personality instantly filled a room. She wanted to walk me through each perfume she made, but, at the same time, she wanted to step back so I could quietly experience them. Still, she couldn’t help herself, so she’d walk me through each inhalation. “That’s pure gardenia” or “Have you ever smelled real patchouli? It’s different, isn’t it?” accompanied by a satisfying nod. 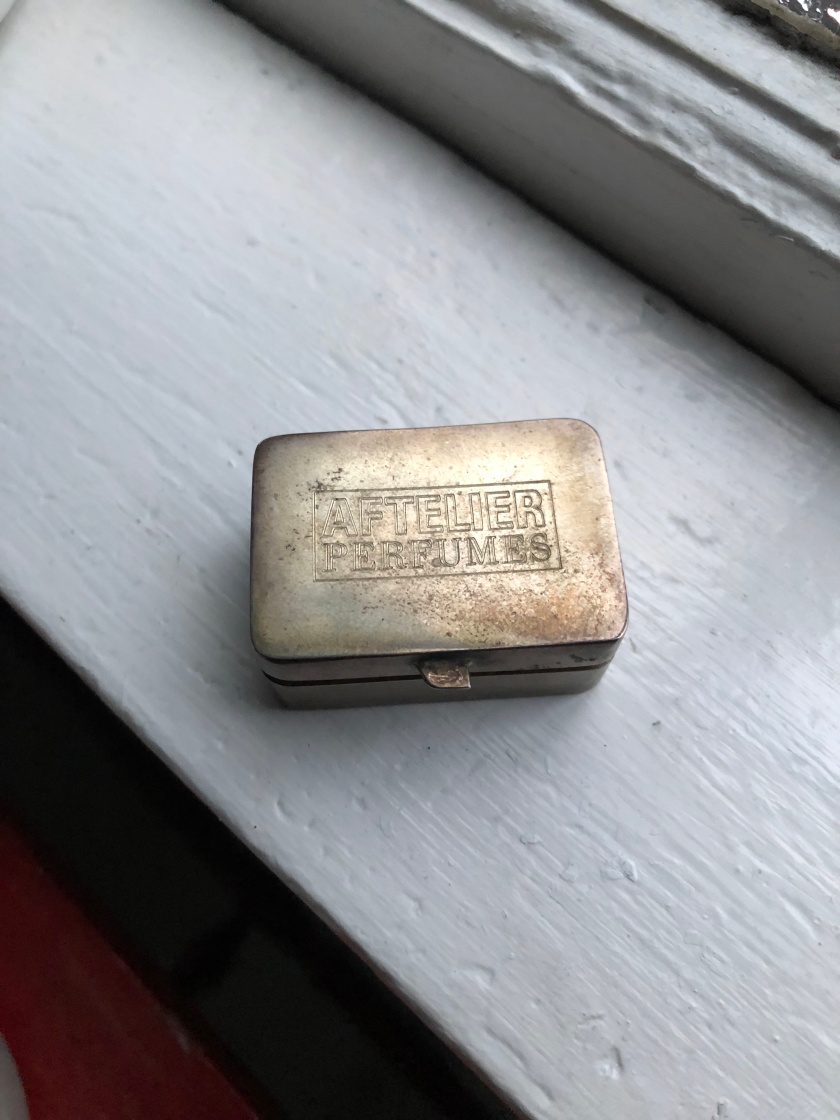 My cherished tin of Fir. Anyone got silver polish…?

In 1997, she founded Aftelier Perfumes, and she did  not skip a beat. When she offered a whiff of her new creation, Fir, in 2007, I knew my nose had found its way home. The scent was like walking through a Christmas tree farm at dusk. To this day, I keep my tin of Fir at my desk and give it a good inhale any time I need a dose of comfort. 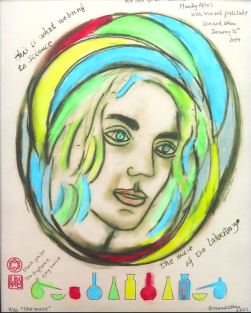 Leonard Cohen drew this for Mandy. Courtesy of vogue.com

Mandy is that rare person who has famous friends and clients, but would never drop their names. Not so much because it’s bad form, but because the thought would never occur to her. Leonard Cohen was a client for decades, but any time the musician tried to meet or speak on the phone, she rebuffed. “I was way too nervous to talk to him,” she huffed. “I always made my friend do it.”

She eventually relented and flew down to L.A. to visit him during his last year. “And I’m so glad I did,” she recalls. “He was wonderful. I stayed for four hours.”

Cohen’s drawings, basically love letters to Mandy, adorn the walls in her cozy chic arts and crafts home, but before I can read all of his words, she grabs me gently by the elbow.

“I need you to see the museum before it gets dark!”

Aftel Archive of Curious Scents is housed in a cottage on her property that she and husband Foster Curry turned into a legit museum of fragrance.  The long, airy space is loaded with fantastic artifacts, from ancient pharmacy perfume catalogs to dozens of raw materials, many of which are no longer legal to use in fragrance, like ambergris (just look at the whale, below, and use your imagination) and many that are rarely attainable in their virginal form. 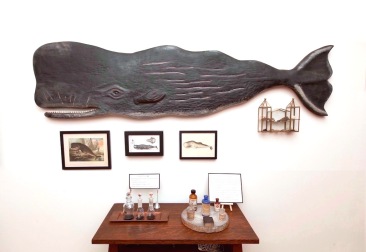 I let my nose go wild with her “organ” of notes, where paper blotters allow users to find his or her favorites. Personally, I found it tricky to narrow down to her suggested three, but gardenia, eucalyptus and vetiver won. She wrapped my three blotters in her custom-made tissue paper, then led Janet and me back inside her house. 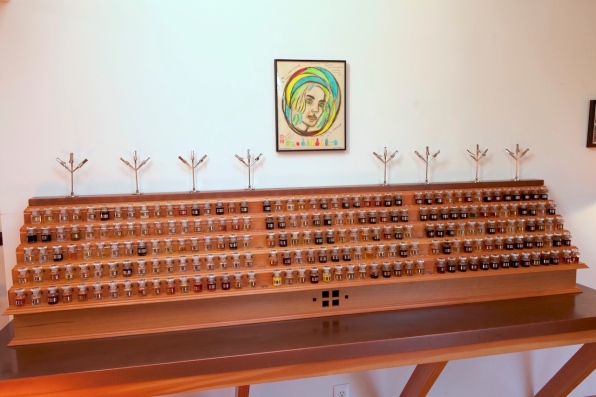 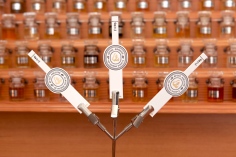 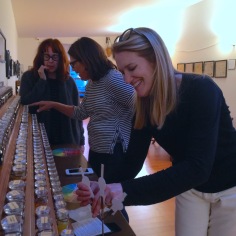 If our friend Kerry hadn’t mentioned the Haagen Dazs incident, I’m not sure we would have ended up in Mandy’s kitchen. But I did, and then we did, and then she opened a wide drawer below the counter. Rows and rows of her Chef’s Essence Sprays beckoned. She sprayed jasmine oil on the dollop of ice cream, then handed the spoon to me. Are you kidding? The taste was a combination of magic and bliss. We proceeded to repeat this process with bergamot, spearmint and tarragon oils. Tarragon ice cream. As the millennials say, I die. Cue the Willy Wonka music. 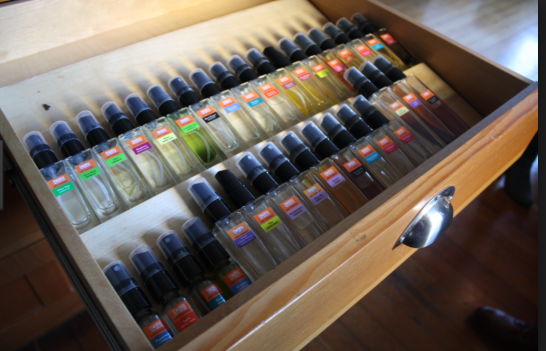 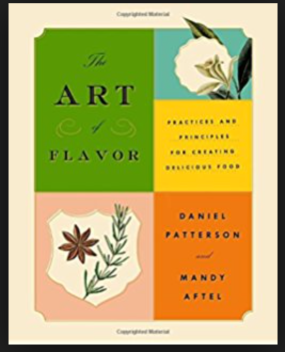 The visceral connection between fragrance and taste is such an obvious one, and yet most perfumers don’t seem to branch out into gastronomy—at least, not in what they create for consumers. And that’s a shame, because Mandy’s essences introduce the tongue to such new experiences, you almost feel sorry for anyone who hasn’t had their spoonfuls of ice cream spritzed with jasmine oil. It was only a natural progression, then, that she share her imagination in a cookbook. She teamed up with 3-Michelin star chef and friend Daniel Patterson to create the The Art of Flavor (this is actually their second book together). My favorite recipe is Meatballs with Citrus Herb Sauce, which is sort of like a new take on sweet/savory meets hygge, but their guidelines, like the seven dials that let you fine-tune a dish or the four rules of creating flavor (including my favorite, “light flavors need to be grounded,” which perfectly illustrates how similar food and fragrance are) are almost like having Mandy and Daniel in your kitchen.

But back to this magical evening. In reality, the Sonoma fires pervaded the night—you could feel it in your throat and eyes—so it was far from perfect, but in my memory, it remains one of those Fall evenings where only a sweater was needed, and the town of Berkeley just felt so welcoming.

The following day, before a crowd of 500+ women inside the Palace of Fine Arts’ vast and sprawling arena, Mandy took to the podium at the Jubilee, while, under Foster’s tutelage, we handed out blotters dipped into two different types of basil notes. She spoke about the correct way to smell and taste (“Close your eyes as if you were kissing a lover”) and encouraged us to experiment with boldness and courage, explaining, “Our home cooking is the fragrance of our life.”  Watching everyone wave the blotters under their noses as they took in her wise words filled me with the pride of being able to say I knew her when. 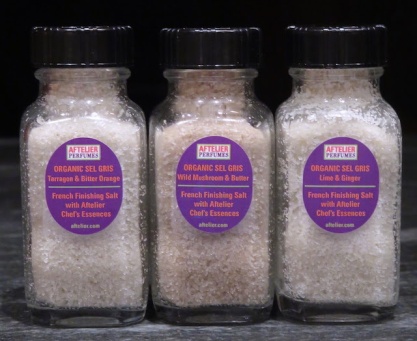 This month, she returns to our pantries once again with her new Flavored Finishing Salts. Personally, I love how salt is huge now and we probably have upwards of 12-14 different types on our shelf (although the truffle one I was gifted a few years ago was surprisingly disappointing…), so I cannot wait to try her three flavors— Wild Mushroom & Butter, Lime & Ginger and Tarragon & Bitter Orange, the latter of which seems to beckon me most.

That said, I do wonder what Fir Salt would taste like…

Mandy and Daniel’s Meatballs with Penne and Citrus-Herb Sauce

For the citrus-herb sauce:

Make the citrus-herb sauce: In a small bowl, combine all the ingredients for the sauce. Taste and adjust as desired.

Make the meatballs: Combine the ground pork and chicken, ricotta, breadcrumbs, and salt and black pepper. Mix well with your hands. Form the mixture into small balls. Place a wide saute pan over high heat and film with the oil. Add the meatballs and sear, shaking the pan to brown them on all sides. Add the tomato sauce and a splash of water. Cover and simmer for 20 minutes, or until the meatballs are cooked through.

Bring a large pot of water to a boil and salt it well. Add the pasta and cook until it is al dente. Drain the pasta and mix it with the meatballs and to- mato sauce. Divide the pasta among serving plates and drizzle with the citrus-herb sauce.