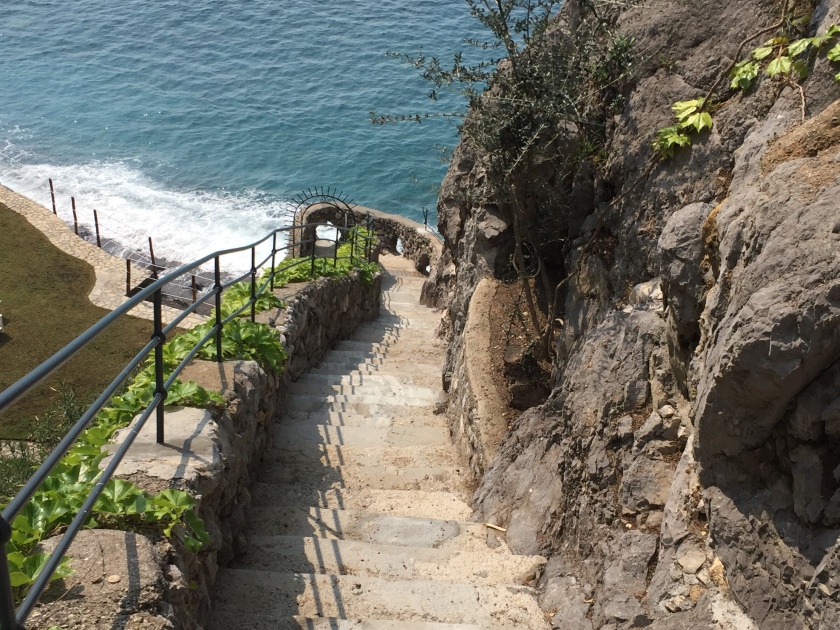 It’s been about 72 hours since I left Positano, and I have yet to stop thinking about the pasta dish that chef Alois Vanlangenaeker taught us how to make. Well, that’s a stretch. We didn’t really do anything but eat, but throughout the hour-long class, he imparted plenty of tips while we sat there with our huge tasting spoons held out, like baby birds ready for the next feeding.

Chef walked us through the kitchen’s many garden-grown ingredients, instructed us on which olive oils to use for what (peppery for frying, less peppery but not the boldest flavor for salads, the most expensive to be enjoyed alone); he showed us how many eggs– and which type of flour–to use for the pasta (9, and triple zero, respectively). My favorite reveal was the secret ingredient in his burrata-yogurt-sour cream mixture (a drop of jasmine oil!) that was placed atop the Amberjack (fish) tartar that I, of course, declined to taste (so much for my “Try fish more!” New Years resolution).

My one big regret is not video-taping the entire class. As the hours pass back here in the States, I helplessly feel every tip he gave us slowly fade into the aether of my brain as I struggle to jot notes in my phone, fruitlessly attempting to save them in vain. My fingers linger over my phone screen as I look off in the distance, thinking, “Wait. He said semolina flour was great for what again…?”

I kick myself especially since each time he stopped to offer up another bit of advice, I felt like he was speaking mostly to me. I think he could sense that I was there to learn.

Or maybe because I was the only student in that kitchen who wasn’t taking selfie or Boomerang shots of herself during the class. This sounds bitchy, but I don’t mean it to be.  It is what the influencers do.

I was on a press trip with about 40 influencers from around the world. Some had a few thousand followers, most had hundreds of thousands, one even had 2.2 million and those followers wanted to see! Therefore, lots of shots were taken, by both the influencers and their respective photographers who traveled with them (best friend, sister, husband, to name a few). They shot the food, the bites of food in the large spoons,  the bites of food as it entered their mouths, their mouths’ reactions upon tasting said food. They shot the sauce being stirred, the fish being sliced, the herbs being sprinkled, the dough being pressed through the pasta machine. The hero shot was the pasta as it was sprung from its not-so-tightly rolled coil. The poor Italian assistants not understanding English didn’t know to suspend the release of the tagliatelle until the cameras were focused. I felt for these guys who had no idea why everyone was imploring him to “Wait! Wait!”

I held my phone close to me, surreptitiously shooting, and Chef held my attention.

I followed him around, leaning in when he explained how to cut the lemongrass and how to make the parsley last longer. But despite not being preoccupied art directing with two cameras and a selfie stick, I am already forgetting, so I sit here with my laptop, wondering if he’d be ok with me calling him with the few questions that I have. Maybe he has email. Mustering up the courage to ask for his address is on my to-do list.

We were guests of Tom Ford Fragrances; the brand invited us to the gorgeous cliffside village to celebrate the launch of his newest scent creation, Sole di Positano. If being in this magical spot wasn’t enough, we got to stay at the spectacular Il San Pietro, a resort that opened in 1970 and still bears much of that era’s charm. To give you an idea of how fabulous this place is, while most of my friends posted comments on Instagram along the lines of “Where the heck are you??” my three wealthiest friends wrote stuff like, “San Pietro? Love that place” and “You must find my friend Nancy! I think she’s there now, too!”

As the hotel manager led me to my room upon arrival, she smiled, “You have the best one.” Indeed, it was spacious and bright, with white washed walls and a desk with a picture window that looked out at the ocean. The best part, though, was the huge wrap-around terrace that provided views of the vast ocean on one side, and the nearby village on the other. Ah, one of the benefits of being the old lady in the group…

As beautiful as the hotel is, its kitchen is its crown jewel. Renovated it a few years ago, Il San Pietro spent two million turning it a self-cleaning kitchen. Yup, every morning at 2am, the entire place is sanitized with ozone, the same way NASA spaceships and operating rooms are. All of their waste is turned into compost, then re-used in their gardens, which are classic tiered rows inlaid into the promontory.

The kitchen is also a gorgeous–and completely coincidental–Tom Ford blue, which added a bold element of whimsy to its state-of-the-art functionality.

But back to the food. After Chef taught us how to make the burrata mix, he moved on to the pasta. I had no idea how easy it was to make pasta dough, and I was intrigued enough to consider buying a manual machine. That consideration quickly dissipated within a few hours, though. I knew we’d probably never use it, and we certainly didn’t have the room to store one. Truth be told, I didn’t notice much of a difference in the taste and texture of the pasta, so, for now, no machine. But should you make pasta of your own, don’t use salt–especially if you freeze part of the dough for later. The salt within the pasta transforms into tiny black dots. Who knew?

But lets get to the reason I’m writing this post: the sauce!  The flavor was transcendent–savory with a hint of sweetness that just melted us. We all looked at each other in disbelief as we let it linger in our mouths, as if to say, What has this guy done?? And what was in the sauce? Lemongrass, lemon peel, garlic, a few snips of chile pepper and parsley. Basta.

Another surprise was how Chef used the garlic and chile only to flavor the olive oil. Once it became infused, he tossed them out of the pan. “Garlic can be tricky on the stomach,” he explained, and half of us nodded to each other in knowing agreement.  Anyway, here is the simplest, most delicious pasta recipe.

Beforehand, make a lemon reduction with the last two ingredients. Boil water for pasta, then heat oil with garlic and a few tiny snips of the pepper. Leave them in the oil for about five minutes, stirring gently to let the ingredients infuse the oil. Place pasta in boiling water, then remove garlic and peppers. While pasta cooks, add parsley, lemongrass, lemon peel and lemon reduction, stirring constantly on low heat. When pasta is ready, drain it then add to the lemon sauce in the pan. Garnish with parsley*. Serve immediately.

*Chef’s recipe says to add butter before garnishing with parsley, but A)I don’t remember him doing it, and B)I didn’t think it needed butter. But you decide.