On our weekly Friday night drive, we occasionally bring our friend Devin with us. We talk about a lot of shit in the car–work, jobs, people at work we like or don’t (or, in Devin’s and my cases, didn’t, since we have both recently moved on to new jobs). And, like most people who drive to a weekend place with some frequency, we talk about our preferred routes. Devin, if left to the steering wheel, usually takes 684 to 84 to 8, while we prefer 684 to 22. Danielle, meanwhile likes to start on 22, then head over to Bull’s Bridge in Kent, and connect to 7.

“She’d prefer the scenic route over getting there faster,” Devin explained the other night. “She wants to feel like she’s on vacation as soon as she possibly can.”

I totally get that. When I start thinking about heading back up to Massachusetts (which usually starts happening around Tuesday morning), I have an aerial view in my head of our car winding its way up–not along some interstate, but breezing through leafy villages, waddling its wheels across rickety covered bridges (there actually are two on Danielle’s preferred route), and racing alongside rushing rivers as we make our way to our destination. Man, I love driving, but I love the romantic notion I have of these drives even more.

It all goes back to this hygge craze I first began covering back in December (not to brag…). The cozy factor that we find ourselves wanting to permeate our lives more and more for some reason…And it probably explains my latest kick, smoking our food. 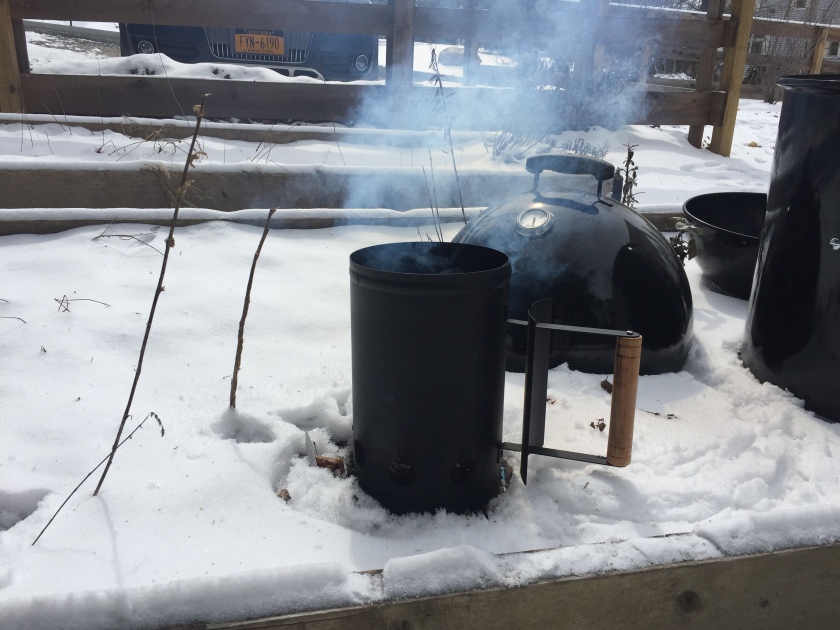 Hygge’s poster child is the fireplace. Having grown up in a home where the fire was going every day of the year, it’s no surprise that my favorite fragrances are ones that smell like fireplaces. So, it was only a matter of time before this obsession made its way into our kitchen. Specifically, the smoker that resides just outside our kitchen door.

Bertrand got me the smoker for my birthday. It sat in its plastic wrapping in a corner of the living for two months until late last month when I became fixated on smoking a cake for an upcoming dinner party.

I googled “how to smoke a cake.” It wasn’t unheard of, thankfully, and it confirmed my decision to place the batter in the smoker on the early side of the baking process. I chose an easy recipe, Bon Appetit’s Salted Texas Chocolate Sheet Cake, one we’d made many times.

After mixing up the batter, I poured it into a round cake pan and handed it to Bertrand, who’d fired up the smoker with mesquite outside next to the garden bed (Actually, he’d placed the smoker inside the garden bed, but it was 13 degrees outside, so I doubted any future mint plants minded. Hmmm…smoked mint..?)  The batter gurgled inside the 180-degree heat, and we let it remain there, smoking for about two hours. 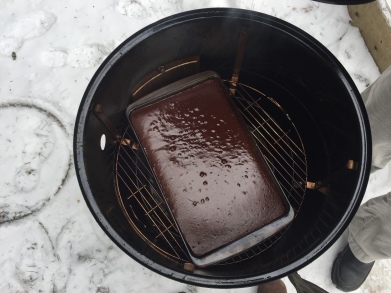 When Bertrand brought the pan inside, it smelled so smokey!  Crazy!! But the batter was still sliding back and forth, so I turned the oven on and we gave it a proper baking for about a half hour more.

When I cut into it after dinner that night and placed each slice on dessert plates, I took a bite of a fallen crumb. Holy shit. The chocolate was there, but a woodsy flavor had permeated within. Mission accomplished.

Not everyone was as smitten as I was. “It tastes like salmon,” proclaimed Elizabeth, although she ate her entire slice, so I guess she got over it. As we sat at the dinner table, examining the sensation with each bite, we debated whether we had smoked the batter for too long, (this fan doesn’t think so), what other types of wood to try in the smoker (apple?), what else would be good smoked (Salmon being the obvious choice, even though I don’t care for seafood, so Bertrand will have it all to himself) and what the name of our smoke-themed restaurant will be “Woody’s”? “Smokin’!”?  “Thank you for Smoking”?). Yep. I was feeling quite smug. 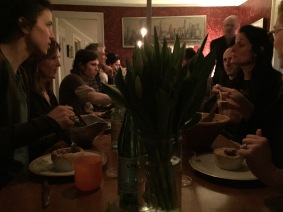 Last night, we smoked the cake again. Same mixed consensus, but the “yays” were intrigued. We stepped outside in the single-digit night and showed off our new toy to our friends.

Up next: bread. Rosemary bread. Can’t you just taste it?

Melt butter and cocoa powder in small saucepan on medium heat. Remove from heat before reaching boiling point. Meanwhile, blend flour, sugar, baking soda and salt in large mixing bowl. In the center, add the eggs, buttermilk and vanilla. Blend together with mixer, then slowly blend in the melted liquid. Pour batter into a baking dish* and place in a smoker. The amount of time the batter spends in the smoker depends on how high you can get it. If it hits around 160-180, leave in for three hours, checking periodically. If it hits 200, two hours is sufficient.  (*We like to use a Pyrex dish that has handled edges. Makes it easier to grip the cake dish when reaching into the smoker). Place cake in oven, preheated to 350 degrees. Bake for 30 minutes.

Meanwhile, combine 1/4 cup unsalted butter, milk and cocoa powder. Once melted, whisk in powdered sugar and vanilla. Let cool a bit, and spread over cooled cake, then sprinkle with nut and salt mixture.