“Come early so we can get to the lake for as much of the August sunset as possible!” That’s what our host’s email read.

With an enticement like that, you bet we got there early. It was our first dinner at these new friends’ home, so we had no idea what this sunset would be like. Not long after we pulled into their driveway and got a quick tour of their house, we were back in our cars, following them a quarter mile up the road. They then turned into a dirt driveway that we’d past dozens of time but never noticed. We followed them through a miniature valley of steep hills laden with pine trees, our car tenderly navigating its way among stumps and branches and the occasional large rock. 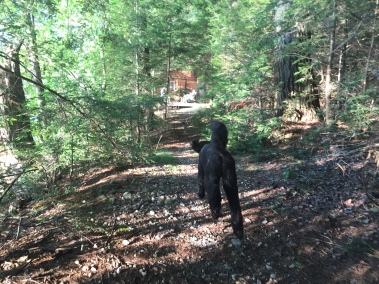 A minute or two later, we reached a clearing. Mountains in the distance, reflected in a black lake that lay before us. It was the town pond, seen from a new angle, across from the public beach we’d visited a few times. To the left,  a wooded path rounded an incline then disappeared; to our right, their cottage, a one-room structure, half of which was three sides of screens that hung comfortably over the pond’s shoreline. 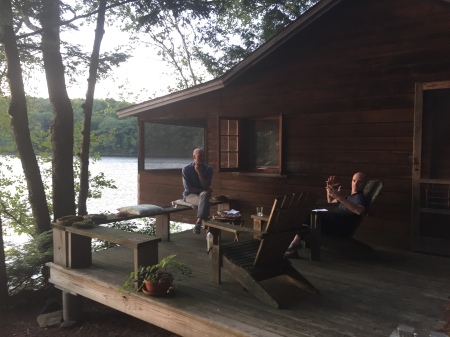 Splayed out in front of the cottage was a roomy deck, complete with built-in benches laced with pillows.

One host opened the rose that we brought while his partner brought out a platter of figs and prosciutto. Bertrand and I sat on the benches, trying to be mindful not to ask too many questions about this magical place as neighbors canoed by and the occasional shriek of laughter from the beach across the way interrupted our chat.

By the time I drained my first glass, I learned that the dream was about to get even better. “We’re eating here??” I asked, not unlike a child who’d been told she could keep the squiggly puppy in her arms. Not that their offshore house wasn’t also magnificent, but the notion of dining by candlelight to the dulcet tones of little lapping waves nearly made me cry.

After the sun disappeared, the mountains turned black and the lake stilled to glass. “It’s like two movie screens,” explained one of our hosts, who had grown up on this lake, of the divided wide screened view.

His father and his uncle had built this cabin in their teens under the guidance of his grandfather, who’d give step-by-step directions along the way, inspecting their progress each week. One can only imagine the volumes of memories he has of this place–some great, some probably not so great, but every single one surrounded by this spectacular backdrop. I felt a pang of jealousy.

Not that my own childhood wasn’t short of its own natural landscapes –Grandma Claire’s vegetable garden that seemed to spread for miles in her backyard, fly fishing at dusk in Lake Chautauqua, crunching through fresh snow around our weekend ski rental in Vermont. But each of those ties had been severed, and we as a family rarely–if ever–returned to them.

So we make new surroundings. If luck stays on our side, our house might someday host a wedding, and possibly enjoy grandchildren scrambling up and down the stairs. Our house may be passed down to Astrid or Luke. And currently, when we serve dinner, while there may be no lake, there is a babbling brook, and thickets of trees to stretch to the sky. And we hear laughter, not from a nearby beach, but from the nearby coffee shop, which brings about the same curious smiles as we sit on our porch.

Our porch is raised above the yard, so much so that it’s almost like being on stage. As cars drive by, the passengers crane their heads when they see our twinkling tea candles that line the floor, then notice the silhouettes of bodies placing food on the table or engaging in conversation. I love this stage setting so much, I’ll often sneak out mid-meal to capture these moments. 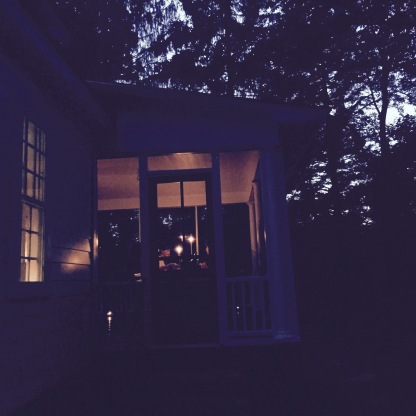 The other night, about 12 of us were enjoying steak and salad. After dinner,  our friend Lisa looked around at our porch and said, “This makes me want to screen our porch in. We sit out there and it’s so blissful, then, next thing you know, you’re swarmed by bugs.”

I smiled, and in true fraudulent form, had to deprecate my perfect porch by lamenting that it could benefit from half a dozen tear mendings. But it was thinly veiled. This old porch was one of the biggest reasons we bought the house. Owning a screened-in porch has been on my wish list since childhood. It’s inherited from my mother, I’m sure, who always longed to live in an old house that had a cellar door and latched wood doors and a screened-in porch instead of the 1950’s Levittown type of house she did her best to disguise with antiques. 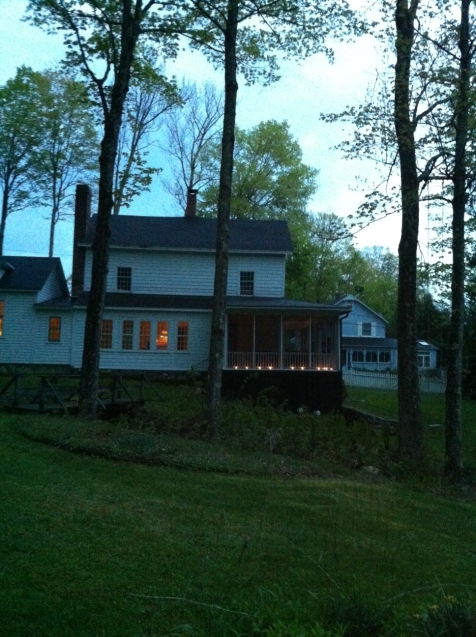 I don’t recall Mom ever longing for a lakeside cottage, though. I guess that’s what I’ll pass down to Astrid.

When the cardboard pints of fresh figs start to turn up  at Guido’s in late August, I dash over to the deli counter to order the prosciutto. This appetizer is one of the easiest things in the world to make. All you need is olive oil and an oven–even a toaster oven will do.

Preheat oven to 350. Wrap each fig slice in one strip of prosciutto (it’s okay if it wraps around twice), then place in oven-friendly dish, like Pyrex or rimmed baking sheet. Once all figs are wrapped, brush each piece with olive oil, then place in oven for 15-20 minutes. Remove and stick toothpicks in each. Serve warm. Or don’t bake at all and serve them as our hosts did, lakeside style.