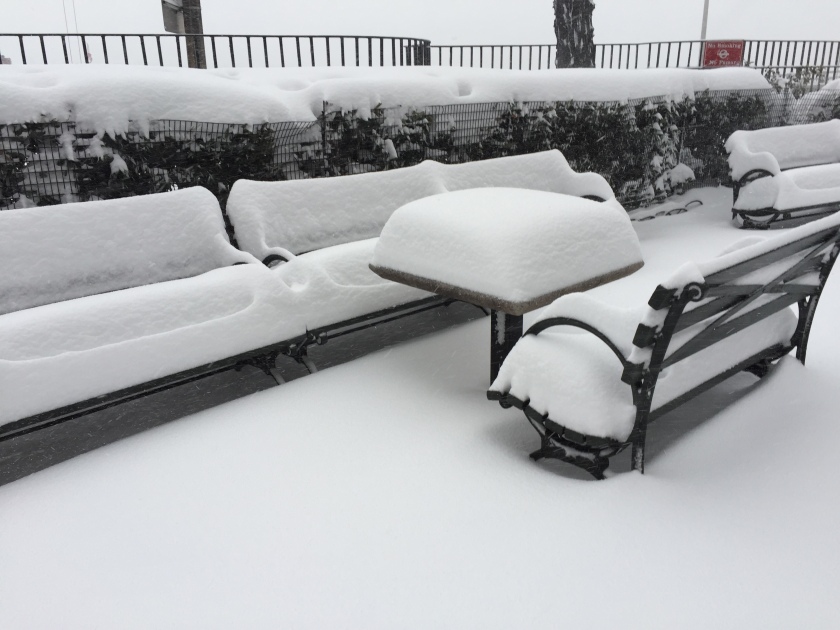 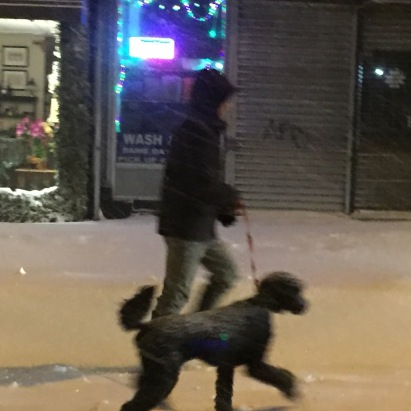 Were we two of the 85 million? We certainly didn’t feel affected. Well, that’s not entirely true. Each time we ventured outside, Remy’s paws would get packed with hard ice balls. What a hardship that we had to kneel down and scoop the ice out. Our neighborhood Equinox remained open, as did our corner bodega, so Bertrand got to both exercise and bring home the onions that I’d forgotten during Friday night’s frenzied supermarket sweep.

That might have been the only struggle we encountered, although it was more of an anthropological study. As everyone was frantically grabbing whatever they felt they’d need to survive Snowmageddon, I observed my fellow Whole Foods shoppers. One woman pushed two cases of bottled water through the aisles in her cart, another loaded hers with bags of oranges. The line at the fish counter was remarkably long, and, by my 8:45pm arrival, all mushrooms and herbs were gone. But the California-grown tomatoes were aplenty. I put two small crates in my basket as my carbon footprint bloated. Hey, we were about to be in a declared state of emergency.

The only reason these tomatoes were on my shopping list was because Bertrand mentioned that he couldn’t find them on his grocery run. Along with them, my basket held two oranges, raspberries, a container of salsa (86 on the guac), pistachio nuts and three bags of chips. Waiting in the very long line and eyeing others’ baskets, mild waves of anxiety swept over me as I realized I’d forgotten the roast chicken. Could we survive without it? I couldn’t bear going to the back of the line. We’ll be fine, I thought. We’ll double up on the tomato recipes.

Yesterday morning, I poured the tomatoes into a cast iron skillet, added slices of garlic, a sprinkle of salt and a semi-generous coating of olive oil. After roasting them for 20 minutes at 400 degrees, we set aside one third of them, then stirred about 1/4 cup of some red wine to the remaining batch. Bertrand poured the sauce over quinoa pasta, then topped it with chopped kale and shaved parmesan. Hearty and healthy. 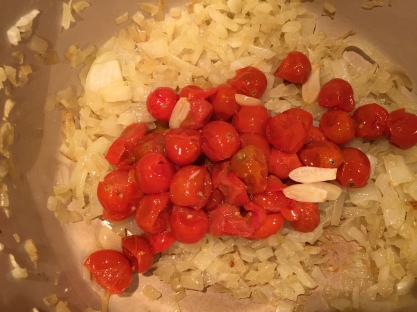 The solids before the broth.

Meanwhile, Bertrand cooked a chopped onion with olive oil in a Dutch oven, then added the set-aside tomato mixture and four cups of chicken broth. After adding a hearty handful of more chopped kale, I let the soup simmer for four hours. A final touch of shaved parm made this soup pretty fantastic.

Thank goodness he mentioned those tomatoes before I headed out to shop. If it weren’t for him, we’d be having orange salsa soup for dinner.