Between leaving the office and loading up the car last Friday, I had a quick drink with my friend Donald Robertson. He, his wife Kim and their brood of five recently moved to LA, but he was in town for a few days signing anything that moved (http://www.donaldrobertson.com/#events), as long as that anything was sold at Bergdorf Goodman.

Donald Robertson with the knapsack he painted of Remy and me

After trying to picture whether Donald was a Mercer, Bowery, Standard or Lowell guy, I asked him where he stays now that he’s no longer a New Yorker. “My friend Gary’s on the Upper West Side,” he replied. “I hang out with his kids and we play Swear Are You?”

“What’s Swear Are You?” I asked, a smile already forming.

“Swear Are You!” he repeated, in a tone that impatiently implied that everyone knew this game but me. “You find dirty words in cities and countries on the map,” he explained in his classic half deadpan/half silly tone. “Bangkok, Fort Dix, Norfolk,” he said, pronouncing it correctly, hence, naughtily.

We love Norfolk, and not just because we like to curse. Nestled in the northernmost tip of Litchfield County, it’s a ten-minute drive south from our house. Known as the Icebox of Connecticut, Norfolk is dotted with gorgeous homes, including the summer campus for Yale School of Music. Locals actually pronounce it Norfork, but any time I try to say it like that, I sound like an asshole–or at least more assholic than cursing its name.

By sheer coincidence, the majority of our dinner guests on Saturday were from Norfolk. How could I not introduce Swear Are You? to these mother ‘folkers?? But maybe at dessert. A bit of wine needed to be drunk first.

Our dinner table seats eight if we really squeeze. With ten guests, a second table was brought in, unfolded and table-clothed. 12 in the dining room isn’t that much smaller than 18 on the porch, but what a difference six people fewer makes. I think the symmetry of two tables side by side provided a neat, compact and well-measured arrangement. Or maybe we were so relaxed was because most of the food had been prepped that morning.

When Bertrand told me he wanted to serve the beef tips, I had two thoughts: First, cheap. Second, Lisa, Simon and Amy had had them once before. “Who cares?” Bertrand replied, adding, “Honey, no one needs to know they’re an inexpensive cut of meat. They’ll be a huge hit.”

“But not on white rice,” I pressed. “White rice reminds me of college cafeterias.” So we compromised. He got his beef tips, but we spread it over black (aka forbidden) rice. Like the previous time we made it, I created a hybrid from two recipes, adding the marinade from this stir-fry (http://www.epicurious.com/recipes/food/views/beef-and-broccoli-stir-fry-23) to this beef and eggplant dish ((http://www.epicurious.com/recipes/food/views/eggplant-and-beef-stir-fry-368260) After marinading the beef for more than six hours, I did a taste test around two o’clock. Way too much soy sauce. Oh dear. Nothing another half cup of sherry couldn’t fix. It did. 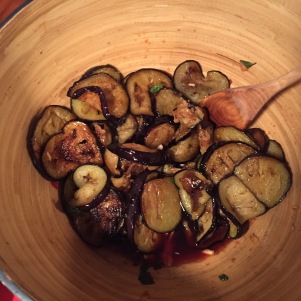 Bertrand was right. The tips were a hit. “Tell me about this beef,” our friend Bobby asked as I passed him to refill the water pitcher. “I’ll tell you later,” I replied, following with a horse’s bluster and whinny. A half hour later, I heard Bertrand exclaim “Beef tips!”

We served them with Bertrand’s two-kale salad (recipe below) and our current can’t-get-enough go-to, Yotam Ottolenghi’s butternut squash recipe from Plenty More (http://www.williams-sonoma.com/recipe/squash-with-chile-yogurt-cilantro-sauce.html)

The best dinners are the ones where everyone joins in. Bobby and Eric came early with Eric’s freshly baked bread, which he used to make ricotta sage toasts, which we coated with Caviaroli, truffle oil encased in caviar beads that I found at Story in Chelsea (http://thisisstory.com/).  Simon brought two great bottles of Cotes du Rhone, and for dessert, we had Lisa’s sea salt brownies and Amy’s apple pie. Even Julian, our one under-age guest, contributed to the relaxed vibe. At some point during dinner, I found him around the corner watching a video on his ipad in the living room.

“Julian, if you want to go upstairs where it’s quieter, so you can watch your movie or take a nap, feel free,” I offered.

“It’s ok,” he replied. “I find the noise strangely comforting.” 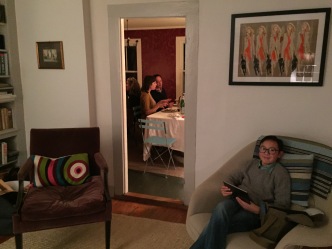 After dessert, we gathered in the kitchen and finished off the brownies and pie with the gelato we’d picked up that afternoon. “Ok, guys,” I held up my spoon for attention. “It’s time to play Swear Are You?”

That got Julian’s attention. When I explained how it’s played, he really woke up. “Arstalia!” he proclaimed.

“A for effort! Try again!” I offered up Donald’s examples, then added a new one: our local ski area. “Butternuts!” taking liberty by adding an ‘s’ at the end of its name. “Double score!”

Diego, who is French, came up with Baton Rouge (give it a minute) while Courtney, his wife furrowed her brow and came up with a few, shall we say, near hits.

Bertrand was pretty good at it, but at the risk of receiving a warning from WordPress’s PR, I shall refrain from listing his. I’ll just say that he got rather creative with “Amarillo” and “Hyannisport.”

I’m sure Donald would approve. 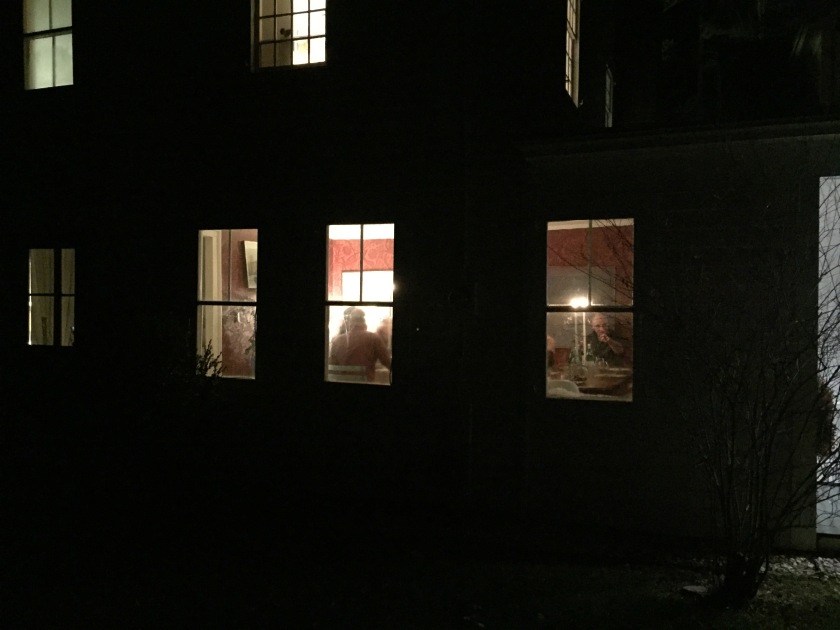 1/8 cup balsamic vinegar
1/8 cup aged, syrupy balsamic vinegar
Pinch of salt
1 clove garlic, crushed
Slice the kale super thin, then mix together in salad bowl. Add hazelnuts and apple. Mix olive oil, vinegars, salt and garlic into small Tupperware or Zip-loc container with top. Shake vigorously, then coat salad.
*You’ll notice that you have to toss the salad more than you would a typical green salad in order to get the vinaigrette evenly distributed.