The sun is brilliant today, as the temperature, low in the Fifties, continues to rise. It’s killing us that we’re not off on our four mile hike, and Remy looks utterly confused, staring up at us with a look that says, Why are you still here? On city days, she is usually walked, fed, then left to her own devices when we head off for work. What is up?

This is the one weekend we’re not up north. With Thanksgiving around the corner, there’s just too much prep work to do. Once we had our pages-long grocery list, we pulled an unusually wise move and took inventory before heading over to Whole Foods. Digging through the kitchen cabinets, we searched for those random items that we always presume not to have, then spend far too much on for their annual single use: cardamom, cumin seeds, fennel seeds, tumeric, oyster sauce. Not only were we flush with tumeric and fennel seeds, we had three jars of oyster sauce. Ka-ching.

After years of lugging all the prepared dishes over to my mother-in-law’s apartment, she has resigned, albeit somewhat reluctantly, to letting us host this year. Oh, shit. That means we have to clean the apartment. Oh, shit. Do we have enough napkins? Oh, shit. We left all the baking dishes up in the country.

All that complaining is bullshit, actually.We’re psyched to host. And we’re psyched to give some new dishes trial runs tonight. Notably, Butternut squash with ginger tomatoes and lime yogurt from Nopi, Yotam Ottolenghi and Ramael Scully’s new cookbook and Chickpea and eggplant curry with mint chutney from Bon Appetit’s new book, The Food Lover’s Cleanse, which comes out the week after Thanksgiving (we’ve got friends…) 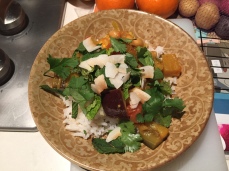 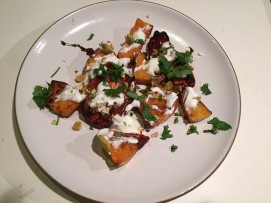 But back to the Oh, shit stuff. Oncewe’d started spending every weekend upstate, our dinners in the city happened less frequently, so unused kitchen items would be dusted off and toted up to the house where they’d be granted a fresh start. And now we were screwed. The great thing about this kind of minor panic is that you hunt around even harder, then uncover all kinds of treasures.

Like these monogrammed French General napkins my sister-in-law Maya gave me for the first birthday after I met her brother. The following birthday? Easy. More, please! I cherished these chic linen gems, taking them out only for special occasions, like dinner parties. And then the dinners stopped, and the napkins were forgotten. Until this morning, when I caught a glimpse of them in the corner of my eye. Oh, happy day! I was so grateful, I placed them against one of the faux-snow-covered trees Maya sent us two Christmases ago when we complimented hers. She’s so thoughtful that way. It’s a habit I try to copy. “So inviting and wintery,” she texted after I sent the above photo to her.

The second wonderful surprise were the extra long tapers Bertrand found hidden on top of the upper ledge of our bookshelves. Crafted candles (http://www.craftedcandles.com/tapers/taper_7830.html) makes 30″ and even 36″ long tapers that add a striking dominance to a dinner table. A motherlode of white and cream ones had been tucked up there ages ago and yet, here they were, patiently waiting to be rediscovered.

And then there are the surprises that appear from general tidying up. Our foyer bookshelves had gone from neatly color-coordinated rows of paperbacks to a clutter fest of random keys, empty sunglass cases, unused sunglasses and half-used tissue packs. As I hid the sunglasses away in the cupboards below, I came upon this wedding present that, from the looks of it, have been hardly used at all. “Let’s bring them up to the house,” Bertrand said when I showed him the two cases of steak knives. “We’ll never use them here.” Famous last words.

The ultimate find was one I’ve been searching for forever.  Another wedding gift was the embroidered tablecloth our friends Christine and Oliver had given us. Despite its huge size, I had not been able to locate it for a few years, but I really needed it now. The size of our guest list called for a second dinner table, which was going to be the fold-out twenty-five buck one we’d picked up at Target. Chic. I’d searched everywhere for it, but to no avail. As I sat on my bed this afternoon, I thought of one place I’d never looked but was always digging into: the linens drawer beneath our bed.

I didn’t rush it. Perhaps not to spur the disappointment gods into yet another victory, I continued to scroll through my Instagram feed after the notion struck me, though my mind kept saying, “Open the drawer. Look in the back. Look waaay in the back.” After a few minutes, I stood up, knelt down and opened the drawer. Casually reaching my hand past the pillowcases and folded fitted sheets, I felt a thin linen fabric. Nope, that was the Matteo top sheet I’d treated myself to a few years back. I reached over to a second pile and felt. Sturdy, linen, a hefty mound. My eyes widened. I pulled it out and threw it on the bed. “I am SO GOOD!” I beamed at Bertrand.

Tonight, we attack the bedroom. Can’t wait to see what’s in store for us.