The forest is still. With the exception of the early November wind whining through the trees, the only other sound is Remy, her deft paws landing into the leafy, woodsy brush as she navigates nature’s obstacle course like a thoroughbred. 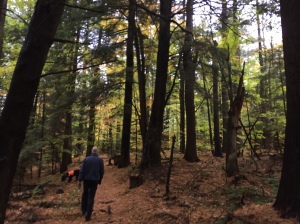 After four or five minutes of meditative walking, Bertrand breaks the silence. “Do you think Mariah Reynolds was in on the blackmail plan?”

I laugh. I’d been wondering why Angelica was the only Schuyler sister who spoke French. 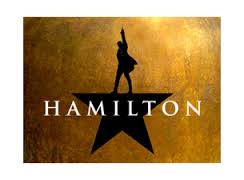 We’re talking about Alexander Hamilton; specifically, the musical “Hamilton,” which has taken over Broadway and, many would argue, New York. After reading the New Yorker profile on its creator and star Lin Manuel Miranda back in February, Bertrand had wisely ordered tickets to the show. By the time we saw it last Spring at the Public theatre, seats were impossible to come by. We loved it so much, we knew we had to share the thrill with the kids, so I promptly bought three more tickets so we could take Luke. That was in April. The tickets are for tonight. We can hardly wait. 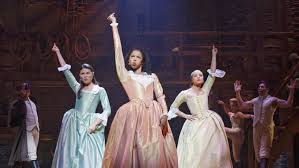 Our obsession with the show expanded greatly when the soundtrack came out in September. It replaced our NPR podcasts, conveniently filling in our 2.5 hour trip up north practically down to the last rap couplet. When we’re on our bikes the next day, we challenge each other’s lyric memory as we pedal along country roads. While I tend to coddle one song in my head for days (currently, it’s “The Schuyler Sisters” or “Here Comes the General”), Bertrand will blurt out a line as we make dinner or pack the car. It’s usually either “They say…” the opening words to King George’s hilarious “What Comes Next” or “A founding father without a father” from the opening number.

This musical obsession is nothing new for me. Like Miranda, I grew up listening to Broadway soundtracks. My shy childhood solitude made friends with the casts of “Grease,” “Pippin,” “Godspell,” “Annie,” “Runaways,”  and “Jesus Christ Superstar.” Every day after school, I’d lock myself in my bedroom, pretending to be Jan or Pepper or even Judas if I was feeling extra spunky. Conversely, the number of tear jerkers were endless, too. When “Les Miserables” opened, I bought the tape before I saw the show. I remember playing it on my Walkman as I sobbed behind my sunglasses listening to “I Dreamed a Dream” for the the first time. During an unrequited crush, I would play “Fine, Fine Line” from “Avenue Q” to feel justified. Oh, the drama. 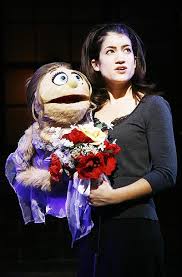 The Broadway tune is an acquired taste for some. On a recent podcast of Pop Culture, one of the panelists chose “Hamilton” as his pick of the week. “I don’t know how you Broadway fans do it,” he laughed [I’m paraphrasing]. “It’s exhausting, but I now understand. I find myself punching my fist in the air at home belting out  ‘Wait for it.'” I nodded in silent bonding.

Bertrand is like that panelist. Bertrand, who I can never drag to a musical, is in it. Not only does he listen to the soundtrack every day, he’s doing me one better by reading the Ron Chernow biography that inspired Miranda to create the show.
We’re curious to see how Luke will respond to it. We’ve agreed to let him form his own opinions. As difficult as it may be, we will resist elbowing him or nodding silent Isn’t this amazing??? grins during our dozens of favorite moments.

It doesn’t really matter, though. The fact that we’ll have someone new to discuss the show with excites me. Not that Bertrand and I have covered it all. We’re barely through the first act.