Last Fall, our friends up the road invited us to dinner. “We would love to cook an authentic Peruvian meal for you,” Felipe wrote, in his kind and gracious tone. He and his wife had relocated to New York several years ago, then bought their weekend house within months after we’d moved into ours.

The night before, I came down with a bad cold, so we bowed out and to this day, I have no idea whether they served cuy (look it up, but brace yourself), but I bet they served quinoa.

Did you know that Peru is the largest exporter of quinoa? The country grows 25 varieties of the grain, and though we’ve never veered beyond the standard white, red or brown, it’s been a staple in our kitchen for the past few years. No fewer than six bags of it overflow our pantry shelf at any given time, and it continues to be restocked despite the lack of productive output. Yeah, despite hopping aboard the Quinoa Express the minute we learned how to pronounce the word, we’ve struggled to include the calcium-rich power grain on a consistent, interesting (read:tasty) basis. The sad truth was, beyond Bertrand’s kale salad (where it is a very welcomed warm, textural presence), we just weren’t finding our quinoa groove. I tried infusing it with mint syrup (meh) and mingling it with everything from corn, potatoes and brussels sprouts, but, despite its fabulous health virtues (or, perhaps, because of them?), it always kind of faded out on our plates. We started to wonder if quinoa was like befriending a famous person who turns out to be quite vapid once you get to know her. Womp womp…

So we headed South–waaay South– to the land of Macchu Picchu, alpaca, El Condor Pasa a

nd quinoa. And, mira, did it deliver.

First, there were the fluffy pancakes we devoured at Tambo del Inka (http://www.libertador.com.pe/en/luxury-collection/tambo-del-inka-hotel/general-information/) 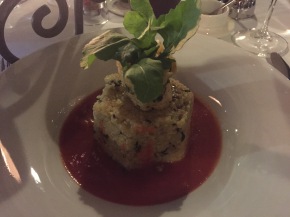 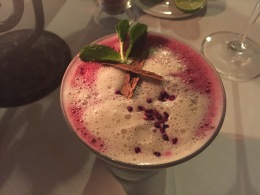 where we also snacked on quinoa muffins and bars during our mountain bike rides and hikes. When we moved to the big of Cusco,  Palacio del Inka (http://www.starwoodhotels.com) highlighted the grain in other ways, including the bar’s concoction of a passion fruit and quinoa cocktail. My favorite dish, however, was Palacio’s Pearlized Quinoa Florentine, a light mountain of the grain blended with mushroom, spinach and parmesan, floating amid a basil-infused tomato sauce. It was so delicious, I ordered it three different times, the third in which I found myself strategically dissecting the entree, so I could better zoom in with my phone to capture in on its hidden ingredients.  It was that good.

We lugged home some gorgeous alpaca blankets and various requisite t-shirts for everyone, but I couldn’t stop thinking about that one elusive memento. So I did what any magazine editor would do: I emailed the resorts’ publicist and asked if she thought the chef would be willing to share his magic.

A day later, it appeared in my in box. In metric measurements, which–no problem–we could convert, but it was a bit trickier than that. Some ingredient amounts were spacial, others by weight. Decimal points were used liberally, confusingly, and, to my American comprehension, incorrectly, not to mention a few questionable instructions (Bleach the spinach? Really? Not blanche…?) Undeterred, we were determined to serve it up that Saturday, so we grocery shopped by judgement, laughter and a lot of shrugging.

As ever, we trusted our guts and reminded each other that everyone coming for dinner were friends, but we still decided that a mini trial run earlier in the day might be wise. I sauteed a few chopped mushrooms with a little garlic and onion, then added about a quarter cup of cooked quinoa, followed with a drop of cream, then transferred the small mound onto a few dollops of the tomato sauce in a little bowl. 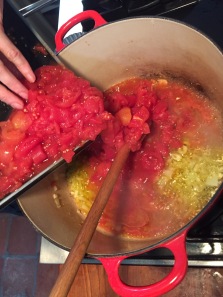 At dinner, we received the highest compliment from our friend Eric. Eric is our kitchen lifeguard. Without fail, he rescues a lumpy risotto, knows exactly when to pull the salmon from the oven and is the first to wander way into the far reaches of the backyard to join Bertrand at the grill.

“I’d make this,” Eric proclaimed after taking his first bite. He immediately added something to the effect of not meaning to imply that he wouldn’t want to make everything we’ve served him, but we knew what he meant.  It was that good.

Cook quinoa and put aside. In 2 T of olive oil, cook 3 cloves of garlic and half of the onion until soft–about 8 minutes. Stir in tomatoes, then add basil sprigs. Season with salt. In separate pan, heat 2 T olive oil, then cook remaining garlic and onion. Stir in mushrooms and cook to softened, about 6-8 minutes. Stir quinoa slowly into the garlic-onion-mushroom mixture. Stir in cream and cheese until it forms a risotto-like texture. Finally, sprinkle in chopped spinach.

Fill six pasta bowls with a shallow level of the tomato sauce. Pack the risotto mixture into the dough cutter, then carefully place in its molded form into the center of the bowl of sauce. Gently place one parmesan crisp into the top of risotto, drape a sprig of arugula over it, then sprinkle grated parm over the risotto and sauce. Serve immediately. It’s that  good.