The scene playing out in our front yard warmed my heart. Cars lined along the road, a dozen or so people dressed in cycling gear on our front lawn–some greeting each other with hugs, some pumping their tires, others slipping their gloves or helmets on. It was the kind of happening we usually drive by with our noses pressed to the window, wondering, Who are these cool riders? or Why aren’t WE part of a big group like this? Yet, there they all were, gathered at our house. Family and friends, about to hit the back roads for a 35 mile ride. Was that a raindrop…?

“Jane knows the route best,” I heard Bertrand call out as we all clicked into our pedals and flowed out of the driveway. “Follow her.”

Holy shit. I’m the leader? I’m never the leader, certainly not in the realm of cycling. But I did know the route best, not that it was a confusing one. He was being chivalrous and encouraging, and I appreciated the assignation.

As the rain begin to fall in earnest, I assessed the voices behind me. The closest were Bertrand’s co-worker David and Astrid’s boyfriend Eli, who was describing the 128-mile “Death Ride” he and Astrid, our daughter, were set to do in the Sierra Nevadas the following weekend. Eli sounded so close, as a matter of fact, I think he was drafting (look it up. No, it has nothing to do with flatulence). Behind them were Astrid and Eli’s best friend Connor, followed by their friends Emma and Will. Bringing up the rear were Bertrand, Hope and John, who we’d invited just the night before when we ran into them at the Prairie Whale.  I love small town weekends. 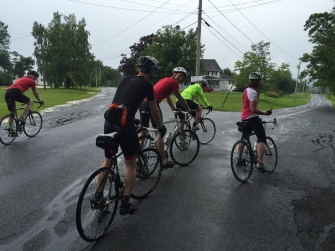 To turn back? Or not? (Absolutely turn back…)

By mile 10, introductory conversations had evolved into anecdotes fraught with bursts of laughter. Mile 17, though, that spot separated the hearty from the soaked. David was heading on for another 22 miles, 12 of which included the arduous dirt road climb up Mount Washington. Being preternaturally lazy, I was grateful we had an excuse. “We’ve got to turn back to prepare lunch,” explained Bertrand. “Team Bailout! Who’s with us?!” “You mean, Team Family Values!” countered Connor. Family values won by a landslide (speaking of the hike up Mount Washington…)

By this time, everyone was soaked but me, thanks to my nifty (and chic) Rapha rain jacket (http://www.rapha.cc/) which kept me reasonably dry. My early lead long ago settled into that of caboose, a position I inherited from my mother. Whenever we skied, she was always the last one down, slowly traversing as we waited near the T-bar line. I liked my stretch of backup solitude; it meant that I could sing to my heart’s content every obscure show tune that lodged in my head. “Miss Marmelstein,” “Morning Glow,” anything from “1776.” Maybe that’s what Mom had been doing up there at the rise of the ski trail. “Loverly,” perhaps? Or maybe “Something Wonderful.” 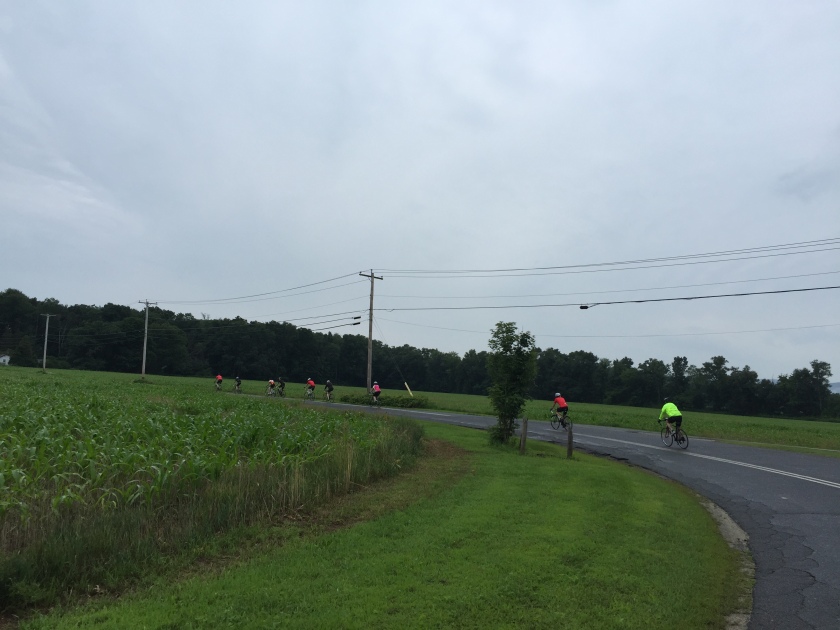 View from the caboose…

Growing up, I’d always equated sports with cool moms. Marybeth’s mother driving us to our swim meets; Giff’s mom sharing bloody Mary’s at his regattas; Dave’s being at all of his ski races. I’ve looked back on those moms with envy, but only now, decades later, I realize one major memory flaw: With the exception of two years on swim and diving teams, I wasn’t really involved in sports. How could my mom be a cool mom if I wasn’t on any teams? When I did compete, she had been there support me. At swim meets, waiting on the grass with a dry towel.  She wasn’t the one who stopped showing up. I was. When the dives got harder, I quit. When I didn’t feel like waking up early for swim practice, I quit that team, too. I wasn’t the cool one here.

Astrid brought Mount Washington back with her

I realize that dropping a sport isn’t unusual. Bertrand played basketball, but stopped in 10th grade. Luke happily quit hockey team in his senior year. You move on to other interests. Back when the kids were in school, I looked forward to their various games and tournaments because this world was a new gift–kids, husband, being welcomed by the other parents. What’s even more fun, though, is playing right alongside them. Their mom and dad taught them to be great skiers and tennis players, but Bertrand and I turned them on to hiking and, now, cycling. In the rain.

Wouldn’t you know it, as we finished our last incline into our village, the sun started speckling through. Ten minutes after I’d changed out of my wet togs, the temperature had risen a good 15 degrees. Suddenly, it was hot, which was a good thing because lunch was hot Summer day fare. Grilled salmon, cilantro corn on the cob, tomato and mozzarella salad and kale quinoa and apple salad. 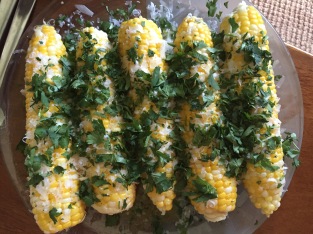 Astrid, who doesn’t know the meaning of “quitting the team,” had stayed out on the road for an additional 20 miles with David, who’d had his own upcoming race through the Welsh countryside. Together, they–and Emma, who went along just for the challenge–trudged up several more hills and through miles of muddy roads.

While not the most aerobic activity, I’d be remiss if we didn’t include cooking in our list of sports we turned the kids on to. Perhaps even more bonding than a ski trip to Alta or hiking the Appalachian Trail, the time we spend in the kitchen with them warms my heart the deepest. When Luke and Dad knead pizza dough together or Astrid frantically texts from college, begging for the source of my vegetable Napoleons  (http://www.epicurious.com/recipes/food/views/roasted-vegetable-napoleons-11431), there is no higher compliment.

As they’ve become adults, the tables have turned. Astrid is part owner of a start-up company that makes a power bar, the Phi Bar. Until it launches, I have the secret recipe, which I cherish.  Luke owns better knives than we do, and has better cutting skills. Apparently, though, the dish washing gene has not made it presence known yet…

In large frying pan, fill with  shallow amount of water, about 1/2 inch. Bring to boil and place corn in and cook all sides for no more than two minutes. Remove and place on large plate. Gently coat each ear with olive oil, then salt to taste. Roll each ear in plate of the cheese, then sprinkle with cilantro. Serve immediately.