We are idiots. It’s one thing to stress about the menu when your guests are a bunch of fancy foodies, but it really makes no sense to stress when a) you’re cooking just for family members, and b) you’re only responsible for the sides. Nope, being the kitchen show-offs we are, we decided we had to a) make five sides and two salads, and b) make a main dish, too. The latter reason not because a) I don’t like Uncle Jeff’s salmon, but because b) I don’t like anyone’s salmon. I don’t like seafood (see “fraudulent eater.”). So, there we were, with Christmas Eve dinner looming one day away, forking over $300 at Guido’s market in Great Barrington, then running back to the house to spend the next 30 hours sweating it out in our kitchen. All of this to impress who? Ourselves? What is wrong with us? 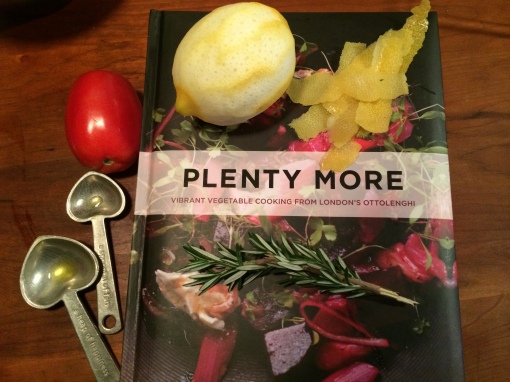 I blame Yotam. If you don’t know who he is, just google “Yotam.” After that, I don’t know whether to say “You’re welcome” or “I’m sorry.” His first cookbook, Plenty is full of thoughtful and healthy recipes, each accompanied with some serious food-porn photography. We’d dip into Plenty from time to time, but his new one, Plenty More has grabbed us by our ever-expanding waistbands and slapped us silly. Once we signed on for the holiday sides, we somehow found a way to narrow it down to five dishes, then proceeded to push up our sleeves and hunker down from sunrise to midnight on the eve of the Eve. By the time we made it to down my mother-in-law’s Upper West Side apartment the next afternoon, we could hardly keep our eyes open.

What is it about the concept of moderation that we can’t comprehend? Sorry to digress, but we do this every time we host a dinner party, too. We’re even worse, in those situations (no surprise). Our friends still tease us about the first one we hosted up here. Being the newbies in the neighborhood, not to mention being the slick city cats (a ridiculous self-appellation, given that nearly all of our friends moved up here from Manhattan), we were out to impress. So we made 12 dishes.  TWELVE. We counted.Actually, our guests counted (and the number increases every time the story is retold). What happens when you take on a task as monumental as 12 dishes? Everything suffers. The food,the hosts. Sure, we had a few hits on the menu, but we had more misses, which made us snap at each other a few times that night. And we are not snappers. The biggest bummer, though, was the gross over-abundance of food, which subsequently, was thrown out. Wasteful and embarrassing.

That was three years ago. You’d have thought we’d have learned by now, but no. On Christmas Eve eve, we cooked enough wild rice salad (page 42) to fill a bathtub (guesstimating) It was good, but it’s a side. No one piles their plate with a side.

But one rice dish wasn’t enough, of course. The black rice and chanterelles (page 190) suffered because I doubled the amount of rice in the recipe, but nothing else. Not the star chanterelles or the flavor-enhancing shallots. Genius. All rice and no shallots makes Jane a dull cook.

I didn’t make enough dressing for the fig salad (page 16), but, fortunately, both of Bertrand’s salads (arugula and kale with applesgrapes and hazelnuts, recipes below) saved the Greens portion of the program. 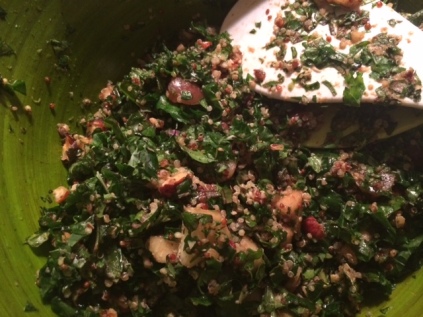 The favorite of Yotam’s sides was the butternut squash with sriracha, yogurt and cilantro (page 181). The squash is supposed to be coated with olive oil and cinnamon before roasting, but we had no cinnamon (whose pantry doesn’t have cinnamon??), so we subbed in cardamom. Not to question Yotam’s choices, but we humbly suggest cardamom. It worked.

Unfortunately, the squash was the one ingredient we didn’t buy enough of, so I made everyone ration. It was like the “Veal Prince Orloff” episode from the Mary Tyler Moore show (It’s actually called “The Dinner Party,” and it’s worth the Youtube)

The lamb was a favorite recipe from Bon Appetit (http://www.bonappetit.com/recipe/roast-lamb-shoulder), but it, too, suffered. I forgot that it calls for letting its rosemary, garlic and olive oil marinade sink in overnight, as directed, so the ten minutes we allowed before shoving it in the oven hardly gave that poor marinade to say hi, much less permeate. Add to that, three hours of transport, then three more hours to hang around and dry out and, well…blah humbug.

Once dinner and dessert were finished, it was after 9 and we hadn’t yet gotten to the gifts. The ten minutes it took to hand them all out was followed by the requisite false-modesty hesitation about unwrapping said gifts (now that everyone at the table is over 21, no one wants to be the first to tear into theirs, to which, I reply, “Bitches, please.”).

The upside to all the aforementioned drama (or comedy, depending on your vantage point) is that Christmas day itself was pretty laid back. We slept late, took a long hike, took an afternoon nap, then went to our friends’ Anne and Martin’s for dinner. Martin is a great cook, and a lover of the roast. Whatever the piece he selects, he and his marinades never disappoint.

Their Christmas menu consisted of roast beef, Yorkshire pudding, roasted carrots and Brussels sprouts. Or, as my dearly departed parents would have called it, Christmas dinner. When I saw the Yorkshire pudding puffing up in the oven, I practically welled up with tears at the memory of the first time my mother let me make it.

When I watched my usually salubrious husband pick up his plate and head back to the kitchen, I picked up my iphone and followed.

“You know this is what my family made for Christmas every year, right?” I asked, as he carved away at the roast, then slid another slice of the spongey warm pudding onto his plate.

“You know I grew up making Yorkshire pudding, right?” I continued, clicking away to document the seconds-of-roast-beef action.

But he hardly noticed; he was too busy complimenting the chef, who certainly deserved it.

I brought it up again the next day, reminding him of the Christmas Eve years ago, when we hosted and cooked roast beef and Yorkshire pudding.”Honey, I honestly don’t remember it,” he replied, patting me on the knee, adding, “That’s not to say it wasn’t delicious. I’m sure it was.”

It actually wasn’t. The reason we had stopped making roast beef and Yorkshire pudding was because the last time we did, about five or six years ago, it was kind of gross. The roast was too fatty and greasy, and it all just kind of screamed Not healthy!!!

And that was that. Every year since, we’ve switched up what goes on the roasting pan: turkey, loin of pork, lamb, along with the Polish dishes my mother-in-law and her sister insist upon, like borscht and babka, which are delicious.

But holidays are about traditions that both sides of a family bring. So, next year, the borscht will share the table with my Yorkshire pudding, and we’ll take our chances with the roast, which will sit opposite the salmon. And next year, we’ll host, and we’ll make everyone do the drive up to our place. We’ll widen the circle and invite Martin and Anne and their kids, who are still young enough to get genuinely excited about Christmas, and shatter that silly false gift-opening hesitation. Yotam will probably be there, too, in the guise of his third book, Plenty Most. And we’ll over-do it and make 12 dishes.