Thanksgiving is a very “Modern Family” holiday for us.  We spend it with Bertrand’s kids, as well as his ex-wife Danielle, her mom, Bertrand’s mom Eva and, often, her half sister and her two sons. For years, we’ve gathered up at Danielle’s house north of the city where she’s happily stood aside and let us take over her kitchen.

When it comes to cooking, there’s something about walking the walk (and, perhaps, a little bit of talking the talk) that can completely fool others into believing that you really know what you’re doing. It could be an action as small as crushing a garlic clove with your fist or using French dish towels in lieu of potholders. Just maintain a serious, concentrated expression on your face while you’re bustling around the kitchen, and those who don’t like to cook can easily convince themselves that they are in the presence of, if not greatness, then at the very least the great promise that a memorable meal is on its way.

It certainly fooled the kids, who both showed interest in our kitchen activities early on. Astrid’s sweet sixteen took place at a cooking school, and Luke’s first job was assisting in the kitchen of our friends’ restaurant. I think they’re on to us now, but they also appear to have inherited our fraudulence, carrying on the tradition by tying folded-down aprons around their waists and owning one good knife.

Bertrand and I usually cook everything for the big meal, but Danielle sold her house and moved back into the city to an apartment not much bigger than our tiny place, so Eva’s pre-war on the Upper West Side with a spacious living room won. What we didn’t realize was that she’d also decided to take care of the meal. And by “take care of,” I mean “calling Zabar’s.”

For a day or two, I pouted at the phoning-in laziness of this move, but I had to admit there was something liberating about handing off the bird responsibility, especially given how Bertrand took even the remotest dryness in his turkey as a sign of his own sloppy ineptitude. If and when that occurred, the next hour would be full of him quietly muttering “Fuck me…” and other various verbal self-flagellations. Why not take the year off?

So we took it easy and made three sides: David Chang’s spicy Brussels sprouts (http://www.foodandwine.com/recipes/spicy-brussels-sprouts-with-mint* ), roasted butternut squash sprinkled with fried sage (see recipe below) and–the rookie–a persimmon and pumpkin “meatloaf” I’d tasted at a cookbook launch from the fancy Ranch at Live Oak in Malibu (below, the book comes out next Spring). 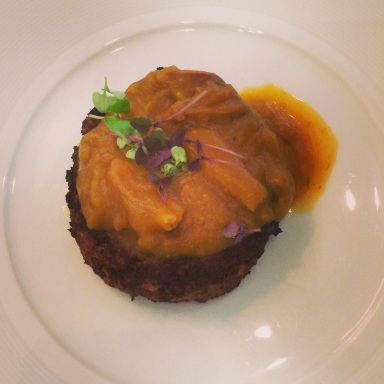 Alas, Whole Foods had no diced pumpkin, so I tossed two extra containers of butternut squash into cart.

Remember how the father in “My Big, Fat Greek Wedding” thinks Windex fixes everything? Butternut squash is our Windex.

During the colder seasons, we eat Windex every week. We roast it with sage and sprinkle parmesan for a light dinner (see opening shot), we make soup with it and toss in brown rice and kale (below)…

It’s the star of our favorite lasagna(http://www.marthastewart.com/314642/butternut-squash-and-sage-lasagna), which I highlighted in a piece I wrote for Cherry Bombe magazine…(photo courtesy of Cherry Bombe and Cherry Bombe editorial director Kerry Diamond)

…and it’s become part of our new favorite appetizer (recipe below).

Anyway, we arrived at Eva’s with our multiple squash-infused dishes to find the turkey, still wrapped in its plastic and still cold, sitting in the oven, set at 250 degrees. “It’s cold, but it’s cooked,” Eva explained. “The directions say you just have to heat it for an hour and a half.”

Just for an hour and a half. The classic one-oven dilemma: We needed that oven to bake my ‘loaf, not to mention heating everything else up, so the cold-but-cooked bird came out. Bertrand tried to see if it would fit into the microwave, but Eva would have none of that. Neither would I.

“Then we’ll eat it cold,” Bertrand said, his voice laced more with exasperation than indignation.

“I am not eating cold turkey,” proclaimed Eva. I wasn’t either (we never agreed like this!). Luke and Astrid, however, went with their dad.

So, we cheated. When Eva stepped outside for a smoke, Bertrand pulled out the carving knife and rapidly sliced off half a dozen pieces of white meat, tossing them into a frying pan. We then cranked up the oven a hundred degrees to let the meatloaf crisp, the sides bubble, and my designated drumstick was sneaked somewhere among it all. What Eva didn’t know wouldn’t hurt her.  Or her tastebuds.

By and large, the meal received mix reviews: Everyone thought the turkey, whichever temperature they were served, was perfectly cooked and juicy, but I, being a long-time butter baster, thought it lacked both juice and flavor. Pinch hitting butternut squash in for pumpkin removed the fluff I’d loved when the Ranch made it for me. And, after some prodding, Danielle confessed that she never really liked our David Chang Brussels sprouts (“The oyster sauce is weird”). I respected that and made a mental note to make two types of sprouts next year.

With the ordered turkey, stuffing and cranberries, along with having significantly less people at the table  gave the day a Thanksgiving-lite vibe. The meal seemed rushed. We didn’t do the usual “What are you thankful for this year” thing that Danielle always liked to start. Awkward as it could be, it was always entertaining. But we all had places to get to–Danielle to a second dinner with her boyfriend’s family, the kids anxious to get up to our house’s abundant snowfall–so we put down our napkins, did the dishes, then headed out the door.

In the five years that we’ve had our weekend place, we’ve never managed to spend Thanksgiving or Christmas in the Berkshires, and it’s mostly due to our family structure: It’s one thing for our modern family to gather together for a meal, but you’re taking it to a completely different level when sleepovers and shared quarters are involved. Next month may change all that. Barring some unforeseen glitch, the kids and all three of their parents plan to convene up here after Christmas for a few days of ski-area-hopping. It’ll be just like the Utah ski trips we’ve taken in the past–Alta one day, Deer Valley the next–only without the expensive flights, luxe accommodations or Mormon spotting.

As for Eva? If we could fry a breast of turkey without her detection, who’s to say we can’t get the Christmas Eve dinner out of the way a few days early?

Like I said, what she doesn’t know won’t hurt her.

(*Chang’s recipe calls for fish sauce. We use oyster sauce instead.)

Mix squash with 2 tablespoons of saffron oil and salt in large bowl until each piece is coated. Spread out on baking sheet (or pyrex dish or dutch oven) and roast for 20-25 minutes, flipping once mid-way through.

While squash is roasting, heat 1 tablespoon saffron oil in skillet. When oil is hot, toss in sage leaves and fry until crisp and curled. Set aside and let dry on paper towel.

When squash is done, remove from oven,then sprinkle sage leaves over them. Stir the mixture, then sprinkle with parmesan and serve warm.

Butternut Squash Toast (I borrowed most of this from Jean Georges Vongerichten’s recipe for ABC Kitchen kombucha squash toasts, but subbed the kombucha squash for butternut, replaced the onion with shallots and skipped the red pepper flakes altogether)

Roast squash and fry sage leaves same way as recipe above, using 2 tablespoons of oil for roasting and 1 for frying the sage. Once the sage is removed from the skillet, heat the last tablespoon of oil in it, then toss shallots in and cook to carmelized consistency (about 10-15 mins).

In a Vita-Mix or food processor, mix roasted squash and fried sage. Add shallots to taste. Mix in vinegar and maple syrup and puree.

Top off with a few pieces of chopped mint, and serve.

Good, right? (Easy, right?) Let me know if you want the soup recipe…