Welcome to The Fraudulent Chef! I chose this name because I consider myself a fraud of many, master of none. I first chose “The Fraudulent Pro,” but my husband pointed out that it sounded like a website offering help to those who’d been scammed online. Oops. If you’d like to buy the domain, inquire within…

So, chef. Many of our friends are foodies. Not self-proclaimed foodies, but bona fide gastronomes. Some own restaurants , some edit luxury food magazines, some run markets. These friends have served up some of the best meals we’ve ever tasted, but the work that went into said meals involved days of meticulous prep work. Not that we don’t appreciate that! We just don’t have the patience to commit that much effort, or time to even attempt creations like the ones set before us.

So, we fake it. Example: Our friend Oliver makes this amazing ricotta and truffle oil pizza on his outdoor grill, which he sprinkles with fresh sage before serving . We once tried making pizza dough from scratch and wound up with plaster of Paris. So, instead, we bought a few great baguettes and made what have become Bertrand and Jane’s Ricotta and Sage Toast. Our friends even request it at our dinner parties now.  Hence, the fraudulent chef (s).

But the fraudulence expands to nearly every aspect. I’m a beauty editor, but I can’t blowdry my hair very well and lipstick is always a disaster; the hems on my jumpsuits and trousers are held up with Scotch tape and let’s just say that certain designer bags and accessories that I carry were purchased in shady back rooms in China. But most of them are the real thing. I swear.

And I swear a lot.

But on to the first post! Snow! Instagram had informed that a few inches had fallen up north, where we have our beloved weekend home, so we were PSYCHED. The snow stayed through the weekend since the temperature never got above 32. So much for planting those bulbs. (Feel free to inform me that there is still time to plant bulbs, and that, even tho snow is on the ground, it does not necessarily mean the “First Frost” has officially occurred. Moreover,  if I just read up on this a bit, I’d know the answer. To that, I say: “FRAUD” can easily be a synonym for “TOO LAZY”)

I had been told, however, that certain perennial herbs, like rosemary, should be wrapped in burlap to protect it during the cold months. As if we had burlap…I  searched through the kitchen and found–Eureka! Cheesecloth! After I tucked the rosemary into its new blanket (see above), I dug up a root of mint (which has taken over an entire garden bed. Yes, we were warned about that, too,) and the remains of our struggling little sage plant, then transplanted both into a 7-square-inch plastic-lined wooden box I’d recently received as a business gift (more on that topic later).  We’ll keep this science experiment indoors and see how it goes. Maybe the mint will shove the sage out, maybe both will die. It’s worth a try. And the five minutes it took made me feel very Martha. 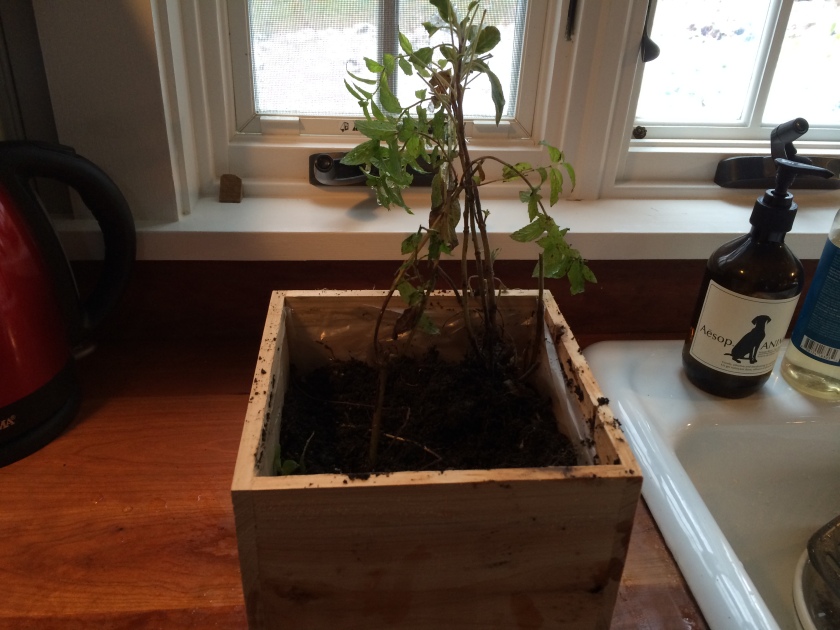 Before we swaddled the rosemary, I clipped a few sprigs for pot roast, a dish I’d been wanting to make all week. Of course, a 27-degree day is perfect for this kind of stick-to-your-ribs food, but it had been on my mind because of a song I’d had in my head for a while. 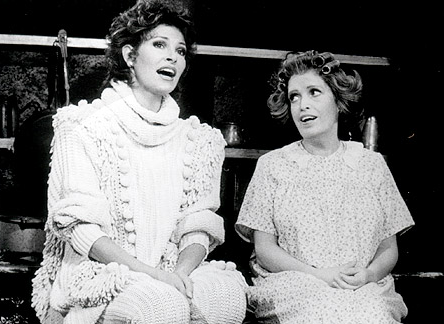 SHOWTUNE ALERT: “Woman of the Year” is a 1981 Kander & Ebb musical based on the Hepburn-Tracy film of the same name. Most of its songs aren’t very catchy, but “The Grass is Always Greener” is an exception. In it,  the glamorous newscaster Tess and the dowdy housewife, Jan, express their envy and awe of each others’ seemingly perfect lives. Lauren Bacall originated the role, but Raquel Welch (above, left. Obviously) soon took over, and while she was surprisingly good, Marilyn Cooper (above, right) won a Tony for playing Tess and stole the show with that one number. Character roles are always more fun.

Jan: “I bet your friends are all celebrities. That’s wonderful.”

Tess: “What’s so wonderful? You can make a pot roast. That’s wonderful.”

Jan: “What’s so wonderful? First you brown an onion.”

And that was why I wanted pot roast. I get a song in my head, then that begets an idea. “Grass is Greener” was silently playing in my head as Bertrand and Remy and I quietly hiked through the snowy woods Saturday morning. “I want to make a pot roast for dinner,” I proclaimed when we got back to the car. “Interesting,” he mused.  “Do you have a recipe?” And I smiled: “First you brown an onion.” No, I did not sing it (maybe next time), but reciting the line in similar syncopation gave the statement an interesting air. That was enough for him.

The great thing about pot roast is that the type of meat, chuck roast, is CHEAP. We got a huge 4-pound mound for $23. I googled “pot roast recipe” and “Pioneer Woman” Ree Drummond’s was the first to pop up (http://www.foodnetwork.com/recipes/ree-drummond/perfect-pot-roast-recipe.html). It has no more than about four or five steps, beginning with browning that onion, but we went rogue from the start (read: FRAUDULENT). Instead of halving a regular onion (per the directions), we browned about a dozen pearl ones (CRAZY), then tossed in a pile of yukon potatoes and some sliced Crimini mushrooms. Four hours later: perfection. Bertrand, not a big red meat eater (he’ll take the occasional bite of my burger), went back for THIRDS.

We’re bringing the leftovers to his mom tonight. She fits right in with the FRAUDULENT theme. But that’s for another post.